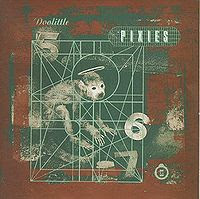 This was definitely where it all started for me. I was in a band in high school, and for some beginning-of-the-year assembly thing, we teamed up with these other kids who were in a different band to try and cover a few songs. (This would have been the summer before my sophomore year.) They had a cassette of songs they wanted to cover, and the ones I was sent home with that I can remember are "Pictures of Matchstick Men" by Camper Van Beethoven, and "Monkey Gone to Heaven" and (I think) "Hey" by the Pixies. I acted cool like I had heard the band before, but I hadn't. And I loved it.

I ended up somehow pussing out of the gig (I think my girlfriend didn't want me to do it or something - I've always felt like an idiot about that), but I wanted to hear more of this band, and I went out and bought the cassette of Doolittle. And that was that: I was hooked. This was the coolest music I'd ever heard.

Doolittle has gone on to be the defining Pixies album, and though I could never say that it's their best (though I have felt that way at certain points), I do understand why it's their most popular. It's got their most accessible song ("Here Comes Your Man"), and is generally a little bit easier to swallow than their other material. I still love this record, though these days I'm probably more likely to grab my copy of Bossanova when I'm walking out the door than this one. But I listened to Doolittle so much when I was a teenager that every single lyric and nuance is still imprinted in my brain. Let's break it down.

"Debaser" - If ever a song defined the Pixies, this was probably it. It's melodic, angry, gross and beautiful all at the same time. Still an incredible song.

"Tame" - This one takes the quiet-to-loud thing to extremes: it literally goes from a whisper to a scream and then back again. If this song were longer than two minutes it might not work, but they wisely keep it short. And the breathing thing at the end is legendary.

"Wave of Mutilation" - Somewhere along the line, the "UK Surf" version (the slower one) of this song became the preferred choice of Black Francis, but I still love the original. Some of the best lyrics Black Francis ever wrote.

"I Bleed" - Kim Deal really gets the job done on this one, not only plodding out the bass line, but also steadily chiming the melody from way in the background. A fantastic song.

"Here Comes Your Man" - Pixies sounding like, I don't know - Paul Simon? Black Francis wrote this song when we was a teenager, and that is really impressive. The song is catchy as shit, and though it's easily the poppiest Pixies song, it's still dark if you scratch the surface.

"Dead" - One of my top three favorite songs on this record, right up there with "Mr. Grieves" and the incomparable "Gouge Away." The verses to this song are just flat-out brilliant.

"Monkey Gone to Heaven" - Easily my least-favorite Pixies song. Still great live because Joey Santiago is consistently awesome on it.

"Mr. Grieves" - The song that contains the lyric from which the album title is derived, and like I said, one of the best songs on this whole thing. Try to find the chorus in this song. I'm not sure there is one.

"Crackity Jones" - A perfect song to come after "Mr. Grieves." The band always had at least one minute-and-a-half wacko track on their albums, and this is one of 'em.

"La La Love You" - David Lovering sang a couple of songs with the Pixies, but this is the only one that ended up on a proper album. Could have just as easily been a b-side, but I think it's great for this record. Remains one of the more random Pixies songs. Listen to it on headphones - there's some weird shit going on in the background.

"No. 13 Baby" - This song always feels to me like it should have been on Bossanova, but it's great on this record. The longest song of the bunch, and it features sweet lyrics and sweet drum breaks by Lovering.

"There Goes My Gun" - What a chorus on this one. The verses just seem like placeholders waiting to get to it.

"Hey" - The favorite Pixies song of people who don't really listen to the band. That sounds asshole-ish. But I think I mean it. Still a great song, though I prefer the more straightforward stuff on this record these days for some reason.

"Silver" - Along with "La La Love You," the other random-ass song on this record. Slide guitar by Kim Deal, bass by Lovering, and a fantastic melody. The last time Kim Deal would get a co-writing credit.

"Gouge Away" - This song has lost a little of its power for me over the last twenty years, but barely. "Missy aggravation/Some sacred questions" remains a great group of words. Just a phenomenal song, and a perfect one to end this record.

Black Francis did an interview in January with the guys from Chicago Public Radio, dissecting Doolittle and providing some pretty cool stories about the album's origins and recording process. Nerd out, podcast style, here.

Still need to get this one on vinyl...

free 4 track Doolittle Live ep from the band at pixiesmusic.com.

how is this doolittle tour not coming our way?

Wow. I don't remember this being your (our) first Pixies album. I could have sworn it was "C'mon Pilgrim." Apparently I even remember chronologically. This record is awesome. You pretty much said it all in your review so I will try not to drone on and on. "Gouge Away" is on my short list for "Best Song Of All-Time" (you can look it up on the message board if you don't believe me). Every time I hear that song I am filled with butterflies. That's pretty crazy after almost 20 years. The bassline is genius, Santiago's noodling is perfect, and the lyrics are straight up awesome. Don't lie, you used to love "Monkey Gone To Heaven." You've just heard it too much. In my youth I always figured that "Here Comes Your Man" was a cover tune. I am pretty sure that I put "La La Love You" on a ton of mixtapes in my early years. I also agree with your analysis of "Mr. Grieves," "Crackity Jones," and "Hey" (my freshman year girlfriend used to play the crap out of the latter).

Funny story. I was sitting in film class when I was 19 watching a short film called "Un Chien Andalou." The very first scene is a close up of an eyeball that gets cut with a razor blade. All at once I went "wait a minute!" And there it was. I had actually deciphered a Black Francis song. Although the film (which is silent) makes no reference to a "Debaser" so who knows. It's a mystery.