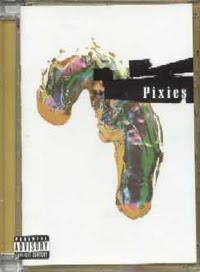 Released in conjunction with Wave of Mutilation: Best of Pixies, this DVD features four distinct sections, all worth watching if you're a Pixies fan.

The first is a 15-song live set from May of 1988 that captures the band in a Surfer Rosa-era, semi-pro-shot set from London. The footage is of a very watchable quality, and seeing the band do a full show at this point in their career is fantastic. It's about a half-hour long, features "Hey" before it was released, and finds the band seeming completely invigorated and genuinely excited about playing. Incredible piece of history.

The second is a collection of the band's six videos that they released when they were together, as well as the promotional clip for "Debaser" that was pulled together from archive footage for the best-of release. That video is mostly pointless and often corny, but the other clips are great. The Pixies clearly hated doing videos, so the resulting output is, depending on how you see it, either frustrating or completely indicative of the way the band thought and acted. (The "Velouria" video, nothing more than the band running down a pile of rocks in slow-motion, is perhaps the most notorious of these here's-your-fucking-video spots.)

My favorite is probably the clip that combines "Dig for Fire" and "Allison," which starts with them donning motorcycle gear, moves to them riding in sidecars with grizzled bikers, and ends with them playing "Allison" live to an empty stadium. Though I also enjoy the "Alec Eiffel" video quite a bit, as well.

The third section of the DVD is called "On the Road," and it features home video footage of the band shot on one of their early European tours. Purely for the hardcore Pixies nerd, but there's some really cool shit here if you're into it. At 30 minutes, it's a nice watch.

The fourth and final section is "Gouge," a mini-doc about the band that has interviews with Bono, Thom Yorke and Jonny Greenwood of Radiohead, David Bowie, and the band themselves (except for Kim Deal), among others. The interviews are cool, but for some reason the only clips they show of the band and the only music they play is from the live show from the first section of the DVD. So when they start talking about Bossanova and Trompe Le Monde, they've got nothing. Though they still intersperse the discussions with songs from the live show, even though they're not on those records. Very strange, considering that there are videos from songs of both of those eras on the DVD as well, so there doesn't seem to be any rights issue. Though I don't really understand how that works.

Like I said though, the interviews are great, especially the ones with Joey Santiago and David Lovering. There's some great insight into where the band was at during the different phases of their short existence.

I am ashamed to say that I just saw this for the first time last week. Not sure what I was waiting for. I'm ready to watch that live set again right now.

Here's a clip from it:

"Something Against You"
Posted by Wockenfuss at 12:24 AM