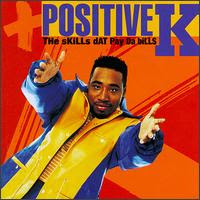 I bought this CD in a bargain bin like two years ago and have listened to it maybe once. Not sure why, because it's actually way better than I thought it would be. Solid early-90's beats, and dude can rap.

Of course, this album - and K himself - will always be remembered for the MTV hit "I Got a Man," but there's quite a bit more to him than that. "Carhoppers" is basically a recycled version of "I Got a Man," but tracks like "Pass the Mic" and "One 2 the Head" are straight dopeness, and with 16 tracks clocking in at over an hour, there's a solid amount of music here.

Next time I'm going through an early-90's rap phase (and I'm way overdue for one), I'll have to remember to bust this thing out. It's been gathering dust for far too long.