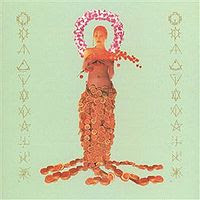 The difference between 1993 and 1996 was huge, especially if you were my age. It was the difference between high school and college, the difference between Cobain and no Cobain. Things changed a lot. And while I expected Farrel to get crazy ambitious with his first post-Jane's LP, apparently he was saving that for their sophomore effort. Fair enough, and I applaud the band for trying a new direction. And there are some good songs on here. But tracks like "100 Ways" and "Kimberly Austin" are some of the weakest songs that Farrel had released up to this point, and it showed. In fact, this whole record was the first thing he did (not counting Psi Com) that wasn't really, really good.

"Tahitian Moon" remains a great song, and so does "Dogs Rule the Night." And "Freeway" and "Porpoise Head" have their moments. But overall, this thing never clicked with me. Yet I stole it from my girlfriend in 1998 and still have it. Huh.

Seriously - it is bizarre how great a song "Tahitian Moon" is, and how bland the rest of the record is compared to it.