Stallion Alert at the Movies: Pixies - Acoustic: Live in Newport (2006) 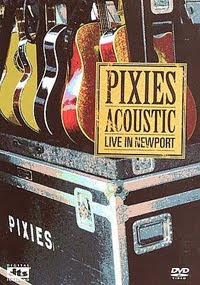 The post-reunion Pixies DVDs just keep coming. Thankfully, they're all different enough to be worth watching. Think this is the last one in my collection, and it's possibly my favorite.

Early footage of the Pixies reunion shows confirmed that their start was a little shaky, but by the time a couple years had passed they felt confident enough to do a one-off acoustic show at the Newport Folk Festival. They're out of their comfort zone for this set, and it shows, but that's half the fun of it. The songs here translate extremely well for the most part, and the ones that don't end up being really interesting. As far as the setlist goes there's nothing too surprising, and most of these songs are the ones that Black Francis uses an acoustic guitar for when they play them in their normal set. Well, maybe not most. A lot of them.

But seeing Kim Deal playing with a huge acoustic bass and watching Lovering trying to restrain himself are both slightly hilarious exercises to witness. Overall, the set is a little shaky, but it's clear they rehearsed and planned to give it a good go. And the whole thing is bizarre to witness: they're on the beach, it's light outside, and they're more subdued than they've ever been. It's worth it just to see that.

"River Euphrates/Velouria"
Posted by Wockenfuss at 1:17 AM