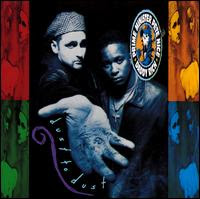 It's a damn shame that Pete Nice only put out one solo record, because this album is dope. Of course, when it comes to 3rd Bass, I was always more of a Nice man than a Serch man, so maybe I'm biased. But I've always loved listening to Pete's smooth flows on this record, and even though I'll admit things get a little cloudy in parts, I've just always been happy that this thing exists. It's not that Pete didn't get time to shine on the 3rd Bass stuff, because he did. I just always wanted to hear him let loose on the solo creep.

Clearly the 3rd Bass breakup was not a pleasant one, and there's some time spent during the course of these 16 songs picking apart Serch, sometimes blatantly, sometimes not. (Check the not-so-subtle beatdown at the beginning of the "Rat Bastard" video.) Pete was always better at being a smooth guy than a tough guy, but hearing him calmly flex nuts is still mighty amusing. His knack for choruses is questionable, but he makes up for it with verses that are worded carefully and executed well.

Pete prefers the lumbering, deliberate beats, and that can start to weigh pretty heavy towards the middle of this thing. The title track picks shit up at the end, but it should have come earlier in the proceedings. Eh. Still, Pete's got his own thing going on, and this record is more than worth the dollar you'll have to pay for it. It's much darker than Serch's solo record, and I think that's a good thing. I've always been glad both of the dudes broke loose on their own shit right after the group disbanded.

This album seems to have been long-forgotten, but I'd argue that it never got a fair shake. Maybe I'm just a Pete Nice fanboy. I'm OK with that.

I am probably the only person who has heard this more than any 3rd Bass album. I found this at Wherehouse for a dollar years ago and took a chance on it. I loved the idea of the Pete Nice solo album. And, all around it is a pretty solid '92, '93-era hip hop album. However, as you noted, there is very little variation with the beats and, at 16 songs, this thing can feel extremely dense. If he would have decided against the skits and maybe trimmed it down to 12 songs, this album would be way more solid. My jams have always been "Rat Bastard," "The Rhapsody" and "Dust To Dust." And whatever happened to Daddy Rich?