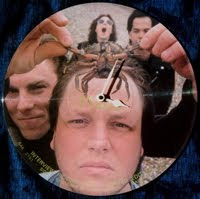 The only image I could find of this record was of one that had been turned into a clock. So that would explain the hands there.

I bought this LP while I was in high school, after randomly finding it in a record store and convincing myself that it was a highly collectible import that would one day be very valuable. (It says "Limited Edition" on it, after all.) It remains a rarity, but as far as I can tell, it's of little value to anyone except hardcore collectors. Still, I've always thought it was a pretty cool record, and I've held onto it for the past twenty-or-so years.

I sort of understand the making-a-clock-out-of-it thing, because it's definitely more fun to look at than it is to listen to. The interview itself is with Black Francis and a foreign journalist (Yugoslavian, maybe?), and the dude speaks dicey English and spends a lot of time either searching for words or talking about himself. Francis drops a few interesting gems here and there (he says he "doesn't read," preferring the "cinema"), but for the most part he sounds put out. It must have been done backstage at a show, because some other band is soundchecking during almost the entire thing, and it's really distracting.

But like I said, a cool record to have. I've always felt like I should just frame it or something. Songs from Doolittle are mentioned, but I'm not exactly sure when this interview was done. '89 is a guess.
Posted by Wockenfuss at 11:59 PM

Email ThisBlogThis!Share to TwitterShare to FacebookShare to Pinterest
Labels: LP, Other