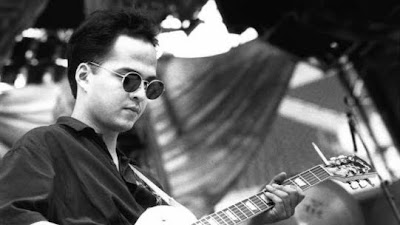 I always wondered how Joey Santiago came up with all his sweet parts for Pixies songs. Like, did Black Francis have ideas and he told Joey what to play, or was it all him? In reading a book about the Pixies and listening to Black Francis on the Sound Opinions podcast that I linked to earlier, I found out the answer: It was all him.

Francis said Joey would take a tape of the songs the band was working on (one at a time, I think), go into a room by himself, strap headphones on, and just play along until he came up with something he liked. Apparently it would take him hours sometimes. That is awesome, because that is always how I pictured it. And I'm glad it's true.

Of course, we wouldn't be talking about it if those parts he came up with weren't so damn great. All of the members of the Pixies contributed a ton to the band (even though Black Francis wrote 99% of the songs), but it was really Santiago that brought the songs to the next level. The dude's never been given enough credit for his guitar playing. Maybe this Pixies resurgence will bring some of that.

Joey, you are a stallion.

That about does it for the Pixies. I covered the majority of their output, but there a few more songs that I wanted to mention before we move on.

"Born in Chicago" - This is a Paul Butterfield Blues Band song that the Pixies covered for the Rubáiyát: Elektra's 40th Anniversary comp that was put out in 1990. I had this on some random cassette that a friend's sister made for me in 1991, and loved the shit out of it. Still do.

"Boom Chickaboom" (sometimes spelled "Boom Chick A Boom") - An early Pixies song that never saw official release (though there is the solo acoustic demo on Frank Black Francis), but this version seems to be the best one out there. Sweet.

"I Can't Forget" - This is a Leonard Cohen cover from the I'm Your Fan tribute that was released in 1991. Cool tune.

"Bam Thwok" - The only new Pixies song to yet be released. Kim wrote it. It sounds like The Breeders. Kind of. I liked it way more than I thought I would.

"Ain't That Pretty At All" - A Waren Zevon cover from the Enjoy Every Sandwich tribute released in 2004. Nice one.

I think that covers the most notable studio versions of random Pixies tracks. There's also a ton of bootlegs of demos and other weird shit floating around the web, so if you're into that sort of thing, you can go nuts.

There's been word that the Pixies will be going into the studio this year to record new material. I remain cautiously optimistic.
Posted by Wockenfuss at 1:51 AM

Nice Stallion Alert! call on Santiago. He really is the unsung hero of the group and yet does so much to set them apart from other groups. I already mentioned this earlier but it bears repeating: Santiago reminds me of the Archers' lead guitar player. They both seem to meander and play very odd-style lead, yet always seem to come back to the song just enough to make it work.

I have always said that "Gouge Away" is one of the greatest songs of all time and that is in large part due to Santiago's little leads that lead into the chorus. They are simple yet something that his wholly him. They provide the perfect buildup to the chorus and really make the song work. This statement is true for many Pixies tunes.

Santiago- you have been Stallionized!