Stallion Alert at the Movies: loudQUIETloud - A Film About the Pixies (2006) 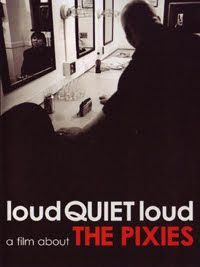 I've watched this movie three or four times since I've owned it, and though it's not the most exciting documentary in the world, I still love it. And I think maybe it's the fact that it reveals the members of the Pixies to be so quiet, incompatible, and mostly normal that makes this movie so interesting. The way they carry themselves and the music they make could not be more different. And yeah, they're playing songs that were written 20 years previous, but I think that was the deal even then.

Anyway, this is a documentary about the band's first reunion tour, and it's done by a couple of dudes who really are fans of the band, and you can tell. Each member gets equal time, the group is shown both onstage and off (mostly off), and you really get a feel for why they're doing what they're doing. Sure, they probably hoped for more action (a minor incident involving David Lovering missing a cue onstage is played up for dramatic effect), but with the whole band being settled and mostly sober, there was never much chance of that. Still, Kim Deal is nuts even without the drugs and booze, so she makes for some fun interviews.

The real thing you get from this movie, and the thing makes me happiest about this band getting back together, is that they finally get the praise they were due. You get the vibe from the band members - and I don't think they're being modest - that they really didn't think the Pixies getting back together was going to be that big of a deal. Meanwhile it's six years later (!) and they're still touring. So to see the look on Lovering's face while he's back behind the kit in front of all those people - after being basically homeless a few months earlier - is really cool.

There's about a half-hour of bonus footage in the extras that are great, too, though it would have been cool to have more rehearsal/live footage available to watch as full songs. But that's a mild complaint.

Another cool movie for Pixies fans. Not a ton of backstory, so if you're looking for old stuff, it's not really here (why won't someone make the definitive Pixies documentary?), but this does a great job of capturing moments that we never thought would happen.

Trailer
Posted by Wockenfuss at 12:21 AM

I loved this movie for much the same reason as you, I think. I have already said somewhere on here that when we first got into the Pixies they seemed so bizarre and mysterious to me that I honestly could not fathom what they looked like or where they were from.

This movie finally broke that wall and showed me that Lovering is crazier than I figured he was, Santiago is more normal than I figured, Kim is just as crazy as I assumed, and Frank? Well, who the hell knows about that guy? He walks the crazy/normal line pretty well so its hard to tell.

The thing I took away from this film was how genuinely disconnected these guys were/are. For a band that was together and performed pretty constantly for 5-6 years they still come off as near-strangers. It makes them breaking up at their peak make more sense to me.