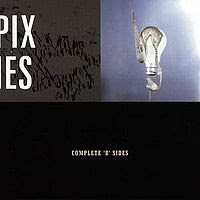 I was a little bit pissed when this came out, because I had done a great job of compiling all of these songs on my own. So, the collector in me was annoyed. But, it's such a great group of songs that I couldn't really harbor any ill will. And it is nice to have them all in CD quality on one compilation, as I had some of the tracks on vinyl.

And best of all, the songs are arranged chronologically and Black Francis/Frank Black provides a little commentary on each one in the liner notes. Awesome. This has gotta be one of the strongest b-side comps ever.

"River Euphrates" - This is the re-recorded version from the "Gigantic" single, which was also redone for the 12" release. I kind of wish they would have included that as well, but their attention to detail when it comes to sticking to the title of the comp makes me equally happy. This version of "River Euphrates" is quite possibly better than the album cut.

"Vamos (Live)" - A solid recording of a live version of "Vamos" that features Joey Santiago going nuts and David Lovering just beating the shit out of the drums. Incredible.

"In Heaven (Lady in the Radiator Song)(Live)" - I mentioned in my previous post that this live recording was the only version of this song available (also on the "Gigantic" single) until the BBC album was released. That was fine, because this one makes for an intense few minutes.

"Manta Ray" - In the liner notes, FB downplays the quality of this tune, but I've always loved it. It's quite simple, but the melody in the verses is not to be messed with.

"Weird At My School" - Apparently this was an early Pixies song that didn't show up until it ended up as a b-side for the "Monkey Gone to Heaven" single. Frantic, two minutes long: everything you want from the band.

"Wave of Mutilation (UK Surf)" - Not sure why the slow version (this one) of this song has become the favorite of fans, but I guess it has. I may have mentioned it earlier, but my friends and I used to listen to the Pump Up the Volume soundtrack so we could hear this song and Soundgarden's "Heretic." Oh, the early 90's.

"Into the White" - I think I said earlier that "Gigantic" was the only track on which Kim Deal sang lead with the Pixies, and if I didn't say "album track," I should have. She has two lead vocal performances on b-sides, and this is the first. They used to play this live all the time, and it's a great song. Uncommonly long one at almost five minutes.

"Bailey's Walk" - Doolittle-era b-side that could have probably fit in on that record. Francis sounds fantastic on this track. All crackly and shit.

"Make Believe" - David Lovering's lead-vocal dedication to Debbie Gibson. Seriously. A more un-Pixies Pixies song you will not find, and it is all kinds of awesome.

"I've Been Waiting for You" - Kim Deal's singing lead again, and this time it's on the first of two Neil Young covers that show up here. One of my favorite songs on this comp. Santiago dials it.

"The Thing" - I mentioned this in my Bossanova entry as the last part of "The Happening," cut away from the rest of the track. In the liner notes, FB calls it a "re-mix of the outro section of "The Happening" from Bossanova, but it really sounds like a whole different recording to me.

"Velvety Instrumental Version" - One of the few Pixies songs that is full-on instrumental. It would later show up on the Frank Black album Devil's Workshop with vocals, but at this point, none even existed. The title, it seems, was a bit misleading. Sweet track.

"Winterlong" - Another Neil Young cover, and though this is a fine song, I prefer the previous one. Cute little ditty, though. Almost too cute...

"Santo" - This was one of the first Pixies b-sides I heard as a teenager. I've never been able to make any sense of this one (shocker), but I've always loved it.

"Build High" - I bought the "Alec Eiffel" single that this was on, and always wanted to know the story behind it. Turns out it's really old Pixies song that they finally decided to throw down at this point. Bit of a hoedown.

"Evil Hearted You" - Another cover, this time done completely in Spanish. Beautiful tune, very mellow for the Pixies. But, of course, it works.

"Letter to Memphis (Instrumental)" - Just the album version with the vocals taken out. Nice enough, but I never really understood the point of this one.

All in all, an incredible batch of songs, arranged in order, which again, is fantastic. So much to like here. This thing deserves to be lumped in with their studio albums. Yep, I said it.

"Make Believe"
Posted by Wockenfuss at 1:10 AM