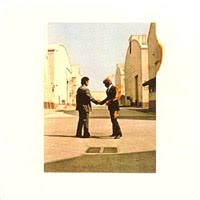 I'm just going to come out and say it: I've never heard Dark Side of the Moon. I'm sure I've heard all the songs separately at some point in my life, but I've never sat down and listened to that record. Never owned a copy. Never even thought about it.

Never saw Laser Floyd. When I was 14 I owned a copy of The Wall on CD, but I never got into it and ended up giving it away to a friend. I really dug the song "Learning to Fly" when they played the video all the time on MTV in 1987, but I never picked up A Momentary Lapse of Reason.

Pink Floyd just never got through to me. And maybe I never disliked the band as much as I loathed the people who were fans of the group. Floyd has always struck me as music for dumb people who think they're smart (much like Tool does nowadays), or people who really like drugs. I don't care for either of those kinds of people. Maybe that explains why I'm proud to not be a Pink Floyd fan. (And yes, I realize how annoying that is.)

Yet, I still have my copy of Wish You Were Here. As a teenager I loved the mysterious album art, and the fact that there's only four songs on it. And really, that's still what I love about it. "Shine On You Crazy Diamond" is such a ridiculous exercise in bloat-rock that I've somehow come to embrace it. I've never been a huge fan of "Welcome to the Machine," but I think the title track is the best song I've ever heard from the band. And "Have a Cigar" ain't a bad one, either.

Still, this has never led me to seek out any of their other stuff, and it's much too late for that now. But I'll hold on to this LP, because I still find it enjoyable from time to time. And I still think the cover art is cool as shit.

I remember that album cover from our childhood. It's a pretty sweet image.

I have "The Wall" on vinyl and kind of liked it in middle school but never got fully behind it. That's pretty much where my Pink Floyd story ended. Although I watched a 2-hour documentary about them. It was fascinating.

Your Tool comparison was pretty on point. Your music writing skills are getting finely tuned.