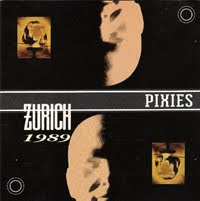 The date on this CD is 1992, but chronologically the show would go here, so that's where I'm putting it. It's a bootleg, so I'm breaking all the rules.

Bootleg CDs were hot shit when I was a teenager (I spoke a little about that here), and this was one of the precious few that I got my grubby hands on. I think it was a gift, but now I can't rightly remember. However I got a hold of it, this one was a great choice.

Recorded in June of 1989, this is Pixies in their prime. Though the back of this CD says that the show was recorded during the Surfer Rosa tour, this was actually two months after Doolittle came out, and the band plays every song on that record except for "Silver," "La La Love You," and strangely enough, "Here Comes Your Man." So that's 12 tracks. The other ten are mix of stuff from their first two records. The live versions of "Vamos" and "Isla De Encanta" are spectacular. In fact, this whole show is damn good.

The band sounds really into it, and the recording (which, from what I can tell, was bootlegged off the radio - Kim Deal keeps saying "We're on the radio!"), while not crystal clear, is plenty listenable. In classic Pixies fashion, there's little talk between songs (aside from Kim rambling, but the rest of the band always cuts her off by starting the next song), so it's just 22 tracks of live Pixies from 1989, and hardly a bit of filler.

I'm sure this is readily available on the internet these days, but back before the internet made the obscure accessible to anyone, this was a rare find. And I've always loved it for that, but mostly because the actual performance here is a great one. Pixies in '89. Tough to beat.
Posted by Wockenfuss at 12:23 AM