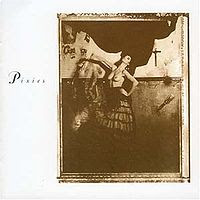 I've been listening to Surfer Rosa for 20 years, and I still love it. I've listened to it four or five times in the last few days, and it still does it for me. You could probably find thousands of people to tell you the same thing. It's just that good.

We can skip all the Steve Albini/they played with steel picks production crap, because I've never really cared about any of that. This album does sound amazing, but it's the songs that do it. The style hasn't changed a whole lot since Come On Pilgrim, but if anything, the band sounds tighter and more assured. I read something recently that described Joey Santiago's guitar-playing as "haphazard" or "erratic" or something of the like, and I don't think that could be farther from the truth. He may not be technically perfect on this record, but none of 'em are. Santiago's role in this band cannot be downplayed. He was a huge part of the sound, and he really brings everything together on this record. And all the other ones.

Like the other Pixies records, I started listening to this one in high school, and the first time I heard it, I was hooked. My girlfriend bought me an import copy on vinyl (that I still have), and it has been one of the hearts of my record collection ever since. That was a great move on her part. Let's get to the songs.

"Bone Machine" - It's really tough to get across how much this song rules. "I make you break/You make me hard/Your Irish Skin/Looks Mexican" continues to be an incredible lyric. Perfect track to start this album off with.

"Break My Body" - Another song about bones, but this time it's about breaking them. An incredible chorus, and the "somebody get hurt" vamp at the end is sweet.

"Something Against You" - David Lovering just beats the shit out of the drums on this song. And it is awesome. Also awesome: the distorted vocals.

"Broken Face" - Another song about breaking things, possibly bones. I always forget that this song is only a minute and a half long. Short and nutso.

"Gigantic" - In high school, the story was that this song was about Kim Deal blowing a black Jesus. Pretty sure that's not true. This isn't one of my favorite songs on the record, but it's still a good one. Hoping for more songs with Kim Deal singing lead? Better check out the Breeders.

"River Euphrates" - This song never came across quite as good live, but it's an amazing track. Joey Santiago sounds menacing on this one, and the lyrics are bleak and confusing. Nothing wrong with that. One of my favorite songs on this LP.

"Where Is My Mind?" - I'm officially sick of this song, though I remember when I wasn't, and I really loved it. Somewhere along the line this became the trademark Pixies track (was it the Fight Clubfactor?), and it remains their show-closer.

"Cactus" - David Bowie's favorite Pixies song. And well it should be, because it's crazy-good. A slow sort of chugger, which is a cool change of pace at this point in the album. And the lyrics are insane.

"Tony's Theme" - This has always struck me as one of the more mysterious Pixies tunes, as it seems incongruous with the rest of their material, at least lyrics-wise. But Black Francis sounds great on this tune, sounding like he's screaming from the other room.

"Oh My Golly!" - This is the "Isla de Encanta" of Surfer Rosa and it is nuts. All the Spanglish you can handle, and the title for the record is tucked in there somewhere. This song will make your head split open.

"Vamos" - The version of "Vamos" on this LP is over a minute longer than the one on Come On Pilgrim, and as I said before, I think I prefer it. When the guitars kick in, it's just too much. And Santiago really nails it on this version.

"I'm Amazed" - Not counting the field-hockey back-and-forth at the beginning of this song, it's not even a minute and a half long, which is perfect. Kim Deal makes it on this one with her backing vocals.

"Brick is Red" - The forgotten Pixies song, which is a shame, because it's so darn pretty. I've never seen footage of them playing this live, and never heard it on a bootleg. I'm sure they played it on the Surfer Rosa tour, but after that it seemed to fade away. A great, great song with a weird structure that they wouldn't visit again.

Trying to pick my favorite Pixies record is pointless, but this one is obviously right up there. But they all are, so that really makes no point at all. I love it - that's my point. One of the most important rock records ever, I'd say.

"Bone Machine"
Posted by Wockenfuss at 12:44 AM

This record is insane. I will always remember being in that sketchy record store in Salem in middle school, shortly after Nirvana introduced us to sweet music, and seeing this record on the shelf. My 12 year old brain could not comprehend that a band had been allowed to put boobs on their album cover. And that people could buy it. To my young mind it kind of seemed scary for some reason. Too much church? All I know is that I walked out of that place with a Butthole Surfers tape and I have never looked back. Kind of wish I would have bought "Surfer Rosa" then because I could have laid claim to introducing us to them. Whatever.

This is probably my favorite album of theirs, although as you said that is a pretty pointless statement. My first high school girlfriend had this album and I thought that made her the coolest chick on the planet. I also remember that ladies really like The Pixies for whatever reason. Was it the Kim factor? They especially loved "Gigantic" so maybe that was it. Oh, I haven't mentioned yet the insane teenage crush I had on Kim Deal. Pretty hilarious given her current state. Who am I kidding, I would still marry her. Not Kelly. Just Kim.

If I had to pick my stand out jams I would definitely say "Broken Face," "Cactus" and "River Euphrates." And I agree with you that Santiago is really The Pixies' secret weapon. He plays odd yet somehow perfect leads.