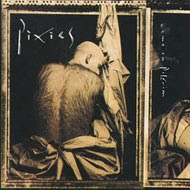 Here we go with the Pixies. Settle in: it's going be at least a week before this is over. At least.

The Pixies were such a part of my teenage years that it's hard for me to imagine being 16 without them. Strangely, the year I turned 16 was the same year they broke up. Frank Black had already put out two solo records by the time I was done with high school. I spent the time before they put out their last record (Trompe Le Monde) playing catch-up, and spent the time right after that record came out enjoying them while they lasted. We'll get to that.

For now, let's talk about this record. I was 11 in 1987, so clearly I didn't get in on the ground floor with the Pixies. I didn't hear them until my freshman year of high school, which would have made it 1990-ish. That's when I started listening to Doolittle, and eventually backtracked my way to this, their first EP. A lot of kids probably have the same story to tell. Surfer Rosa was around, but it was Doolittle that really got to the kids. I think. Me, at least.

Come On Pilgrim is eight songs, selected from the band's demo tape (the infamous "Purple Tape") and cleaned up for major release. It's often overshadowed by the crazy impact that Surfer Rosa had, and has sometimes been packaged with Surfer Rosa on CD releases, which is convenient, but I've always felt it should stand alone as it's own thing. Because it is. And it is fantastic. I'm going to have to song-by-song the Pixies, aren't I? Yes, yes I am. I'll regret it if I don't.

"Caribou" - The first Pixies song on the first Pixies release is really a perfect way to ease into the band: You get the wiry guitar tone right from the beginning, you find out that David Lovering can only play at one volume, and you realize you've never heard a voice like the one that's coming out of this yelping dude handling the vocals. And what a melody.

"Isla De Encanta" - The most rocking-est song on this release, and a great example of Black Francis' obsession with his own version of broken Spanish. I tried to get my best friend to use this song as his homecoming theme song in high school (he would have walked out to it in front of the whole school), but he wussed out. What a wimp. They've played this one here and there on their reunion tours, but not much.

"Ed is Dead" - As with most early Pixies songs, I have no idea what this one is about, but it is one of the first ones to mention surfing ("She's just looking for the perfect wave"), which would become a theme of sorts in their songs. I've always loved the "E.I.D." at the end.

"The Holiday Song" - Dark lyrics and a ultra-catchy chorus - the Pixies formula. They still play this song, and I've seen Frank Black do it solo, too. Must be a favorite. This would be stuck in my head for days in my youth.

"Nimrod's Son" - We loved this one when we first started listening to the Pixies for its foul-mouthed lyrics alone. Of course, it's also a fantastic song. The incest thing was not uncommon in early Pixies songs, strangely enough.

"I've Been Tired" - One of the more narrative songs that the Pixies ever did, and I've read recently that it's supposed to be poking fun at touring rock bands. In that context, it makes perfect sense. The "I wanna be a singer like Lou Reed" always seemed to make perfect sense to me, too. Black Francis' influences are great, because none of them sound anything like him.

"Levitate Me" - I have this fuzzy memory of sitting down at my mom's typewriter and click-clacking out the lyrics to this song in order to better understand it. It didn't work then, and I still don't think I get it. "They kick a baby"? This is also the song from which they took the title for this EP. Makes a great bookend for "Caribou."

Can't believe it's been 23 years since this came out. It still sounds amazing. I recently got a first pressing (import, yo!) of this, and I am very happy about that.

This album always instantly reminds me of middle school. I, like you, fell for The Pixies pretty hard. I wrote their name on all of my textbooks and listened to their albums in a pretty heavy rotation, especially this one and "Surfer Rosa." They seemed so bizarre and mysterious to me back then. I never imagined that they were just 4 random people from Massachusetts. I honestly couldn't even fathom where they would come from. I assumed they were British for some time. Honestly. Oh, pre-internet life.

I love this album because the first 2 out of 3 songs involve Spanish. This further confused me as a youth. I am pretty sure that I put "Isla De Encanta" on every mixtape I made in the 7th and 8th grade. Nice call on going song by song. I myself prefer this version of "Vamos." I would love to know why they recorded it again. I also never thought about the fact that Lovering only has one volume. Nice work.