Stallion Alert at the Movies: Pixies - Live at the Paradise in Boston (2006) 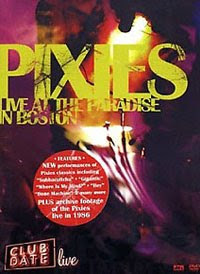 I picked this up for a budget price from Amazon, and didn't really have high hopes for it. A live Pixies show, post-reunion: cool, but how cool can it be? As usual, my presupposition made me eat my words. Or it would have, if I had verbally expressed my low hopes for this thing.

As it turns out, this is a DVD not only worth seeing, but worth owning. This is the Pixies two years (ish) after their initial reunion, and they sound much tighter than they did on their initial tour. So that's good. Also good: this show takes place in a tiny club, and the intimate setting not only allows for great camera angles and sweet sound setup, but it also works to make the band a lot more gabby. The interaction with the small audience is quite welcome when you consider that this is a group that is known for saying very little during their live sets. (Well, Black Francis is, I guess. He talks quite a bit in this thing. More than Kim, even. That's the point I'm trying to make.)

But the best part here is the song selection, and the running order of the set. To give you an idea of how much they were trying to mix things up for this gig, check the first three songs: "La La Love You," "Winterlong," and "Into the White." Awesome move opening with the deep cuts/b-sides. They even fuck up "La La Love You" the first time around and start it over. All in good fun. They follow those three with "Vamos," which is usually reserved for the end of the set, and then proceed to play a great mix of the usual suspects and tracks that, to this point, had rarely seen resurrection. I was very happy to see them do "Planet of Sound," "The Sad Punk," and "Allison."

A fun show all around, and an interesting environment to see them in. Much cooler than I thought it would be. And the small crowd is full of ass-outs, so that's fairly entertaining as well.

This disc also includes, in its bonus features, footage from a Pixies show in Boston in October of 1986. The quality is grainy and a lot of the songs aren't full versions, but the fact that this even exists is miraculous. Plus, they do "Boom Chickaboom," "Rock A My Soul," and early version of "Build High" and "Down to the Well," which are all sweet.

A solid DVD, for sure.