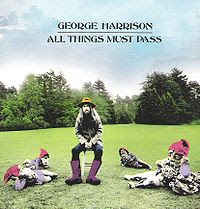 I don't have a favorite Beatle. I like them all for different reasons (yes, even Ringo), and I realize this fully every time I listen to this record.

"What Is Life" and "Let It Down" stack up with anything McCartney or Lennon did in their solo careers, and really, so does the rest of this album. And while Harrison maybe never made a solo record as good as this one again, the other Beatles were just as guilty of releasing some spotty solo work. Anyway, this isn't about the Beatles. This is about George Harrison.

While this is technically his third solo record, it's really his first. While you get the feeling this is the purging of years of repressed-by-Lennon/McCartney output, it's more than that. It's Harrison doing things his way, and though the results are often crowded songs that seems too big for their britches, they are no less powerful. It's clear from the beginning: "I'd Have You Anytime" sounds vaguely Beatle-esque in the opening chord progression, but it splinters off once the chorus comes, going bluesy and showcasing what a stellar singer Harrison really was. The recording isn't crystal clear, but any audio imperfection adds character and feeling to this track and others.

The version I have is the 2-CD reissue from 2001, which contains four outtakes at the end of side one, along with a re-worked version of "My Sweet Lord," which is probably unnecessary, but it is quite different from the original. The outtakes are surprisingly good, though they feel unfinished, because they are. "I Live for You" in particular feels strong enough to have been included on the original 3-LP set.

"Beware of Darkness" opens the second disc on this set, and it's moving without being too aggressive about it. Harrison was slyly intricate in his lyrics, never overcrowding the space and instead drawing the words out to enhance the melodies. It works perfectly on this song. "Ballad of Sir Frankie Crisp (Let It Roll)" is another great track, one that embodies the feel of this entire record. There is a lot going on in the song, but it's separated well and doesn't feel too frantic.

The title track is another one jammed with feeling and sensibility, and it's followed by the fun "I Dig Love," which gets even wackier when he switches it up to "I love dig," which, if it means something, I'm missing it completely. "Hear Me Lord" closes the album proper, and it goes out big. It's a long song, and stacked with plenty of instruments.

CD2 wraps up with a rearranged version of the jams from LP3 of the original set, here changed from "Apple Jam" to "Original Jam." I'm not gonna lie: I don't listen to these Clapton and Harrison bootleg-quality sessions too much. But it's nice to know they're there.

Man, I forgot how much I like this album. And I'm also realizing there are some substantial gaps in my George Harrison collection after this. Might have to hit the record store tomorrow...

"Beware of Darkness"
Posted by Wockenfuss at 2:41 AM

This album is pretty off the heez, although he kind of blew his load early. His next album, "Living In The Material World," is 10 songs of blandness. My only complaint with this one is the "wall of sound" production, something which many of these songs don't really need. "Ballad Of Sir Frankie Crisp" and "Run Of The Mill" are the standouts for me. I could do without the Clapton jams but I bet people were really into those in 1970.