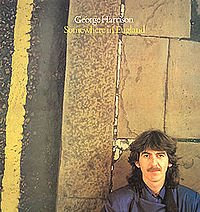 While Harrison's previous album held onto too much of the stuff that sucked about the 70's, this one seems intent to remain relevant in the 80's, and I actually think it works really well. The synths are more deliberate and strong, and there seems to be less of an attempt to smooth everything over and make it palatable.

This is evident from the get-go, as the scathing Harrison returns to form in "Blood from a Clone," a catchy/pissy number about how the 80's are already shaping up to suck. The fact that he name-drops Zappa in the first few lines is pretty sweet, but so is his entire assessment of the state of the music industry. A great song to start with, as it sets the stage for a record that still sounds fairly modern after all these years.

"All Those Years Ago" is a sad but poppy tribute to John Lennon, who was killed shortly before this release. Ringo on drums, Paul on backup vocals. A great song and a fitting sendoff. "Unconsciousness Rules" is another great pop song ripping on current dipshit culture of the time: "You dance at the discotheque/ That's why you look like such a wreck". "Life Itself" is another one of Harrison's "God Songs," which are not usually my favorite tracks of his. This one's no different. Pretty sappy.

The second side of this LP keeps the flow going, as tracks like "Teardrops" and "That Which I Have Lost" end up being a lot more fun than they sound like they would be. "Writing's on the Wall" is pensive but builds nicely, and "Hong Kong Blues" is the second Hoagy Carmichael song that Harrison covers, which explains its very un-Harrison narrative structure.

Of course, the album ends on a predictably quixotic note, and this time it's "Save the World," which contains some of Harrison's worst lyrics. Not really a great tune anyway, and the hacky sound effects it contains don't help. So, that one's a skipper. But the rest of this record ain't bad at all.

"Blood from a Clone"
Posted by Wockenfuss at 2:11 AM