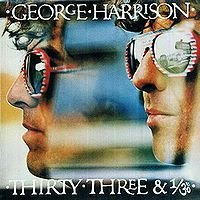 You can't really see it on the front cover, but on the back you can make out that those shades Harrison is wearing are of the bicentennial celebration variety. They're pretty sweet looking, and this is probably my favorite album cover of all his solo work.

The record itself is damn fine, as well. Let's be honest: 1976 was a rough time for popular music. The fact that Harrison made an uncompromising record is not shocking, but it is admirable. His subtle pissiness is in fine form here, especially on "This Song," an intentionally over-melodic jab at a lawsuit he had been involved in prior to this recording. Payback is sweet.

Harrison assembled some badass guys to play on this LP, and their force is felt from the get-go. "Woman Don't You Cry For Me" does sound very mid-70's with its springy bass and sax, but the song is tightly wound and rhythmically infectious. It's a good one. "Dear One" and "Beautiful Girl" are both well-positioned love songs that aren't mind-blowing, but they're quite nice.

The second side showcases more of the musical chops from the first. "It's What You Value" finds a nice groove and features some of Harrison's more adventurous lyrics this time around (though the piano part sounds strangely Billy Joel-esque). "Pure Smokey" is an appropriately smoothed-out tribute to Smokey Robinson, and "Crackerbox Palace" features a simple but catchy chorus. The album wraps up with "Learning How To Love You," which is a bit sappy for my tastes, but it makes for a fine closer.

If you can get past some of the rudimentary synth sounds and the dreaminess of a few of the ballads, this ain't a bad record at all. As usual, Harrison's vocals make it all the better.