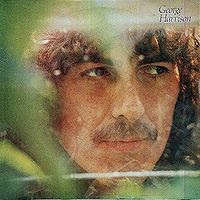 Not sure that I'm a fan of releasing an eponymous album when it's not your first one. I guess I don't have anything specifically against it, but it has always seemed a little lazy to me. Either do it for your first one or don't do it. That's my feeling.

This record hasn't really caught on with me, but I have to admit that I'm not super familiar with it. It's very easy-going and extremely happy, and I think I much prefer a disgruntled Harrison. Seems that George mellowed out quite a bit since his previous record, and that one was pretty mellow to begin with.

"Love Comes to Everyone" is the opener, and though the song itself isn't too bad, the tones of the guitars and the synths are a little cheesy for my taste. "Not Guilty," the second track, is probably my favorite song on this record (probably because I'm familiar with the version that appeared on the Beatles' Anthology 3), as Harrison sounds a bit unapologetic and the arrangement is sparse enough to not get too slick. "Here Comes the Moon" is initially the most Beatles-esque track on the album (imagine that), but the chorus is pure late-70's rock. I actually like this track, too.

"Soft-Hearted Hana" is an OK jangler, and "Blow Away" is a nice and peppy single with a really catchy chorus. So really, I guess I do like the first side of this record. I think it's the second side–where it doesn't necessarily falter–but it just sort of strums along and doesn't take a lot of chances. A track like "Your Love is Forever" isn't bad, but it ends up sounding a bit plain by Harrison's standards.

"If You Believe" closes out the album, and it's just too straightforward and too feel-goody for me. Sometimes Harrison's positivity was too much and too all-the-time. Love is grand, but sometimes it can be too much. But I can still find plenty to like on the first side of this LP.