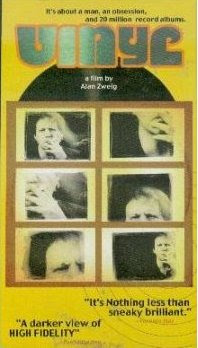 The Jackpot Film Festival was this past week, and though I had hoped to make it to both Wednesday and Thursdays showings, work piled up on me and I could only make to one, so I chose Thursday and saw Alan Zwieg's Vinyl, a semi-obscure documentary about record collecting, and more specifically, record collectors.

Before I talk about the film, I must say that the Jackpot Film Fest is awesome. It's free, they have it at the Hollywood Theatre which is a great place, and they sell cheap records in the lobby before and after the showings. It really is very cool. And, as you can tell, they show great movies. We (the lady and I) went two years ago (I don't know how we missed it last year) and saw an hour of old obscure rap videos followed by an hour of a rare b/w Stax showcase that featured Booker T. & the MGs, Sam & Dave, and of course, Otis Redding. It was sweet to see on the big screen. Anyway.

Vinyl was fantastic. It's very low-budget and very homemade feeling, but it's the sort of movie where that only adds to the charm. Zwieg narrates the film through a series of mirrored confessionals, and tells his own personal story along with those of the people he visits. It never really ends up being a linear tale, but he tries.

The real stars of the movie are the collectors. There's the lawyer who lives amongst towering stacks of records and has to move things around to sit down or go to sleep; the man who claims he owns a million albums and has made it his goal to collect every song ever; the two men who moved in together as roommates after they found a common interest in their huge LP collections. Zwieg does a fine job of painting these folks as weirdos and antisocials, and most of them are. For some, it seems more like a hoarding thing than a collecting thing. (The lawyer leaves his records all over the floor but almost starts crying when Zwieg steps on one of them. Odd.)

Each collector had their own story, and as you would expect, each one had their own genres or artists they collected. The story of the man who threw out his entire collection because he had nowhere to put it and couldn't handle the idea of someone else touching his records was fantastic. Extreme (and crazy, if you ask me), but I'd be lying if I said I didn't understand how he felt.

Overall, it made me feel like my record collection is tiny, but also that there are people out there who are way more "addictive" about it than me. To the point where it gets in the way of their lives and becomes a problem financially or space-wise. It's a pretty fascinating look at the lives of some of these folks. I would have liked more talk about specific records and possibly a scene of one of the guys showing off his prized possessions, but there was none of that. My only complaint.

The movie has never been released on DVD, but you can watch it online if you look around. Here's the first few minutes on YouTube.

Vinyl
Posted by Wockenfuss at 3:00 AM