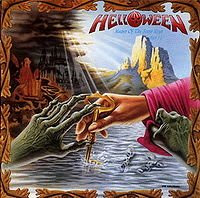 I just bought this CD, so bear with me. I've had a copy of Part 1 since Christmas (sorry, Helloween!), but bought my own copy, along with this one, last night (you're welcome, Helloween!).

Hey, we think so supersonic
And we make our bombs atomic
Or the better quite neutronic
But the poor dont see a dime

This record, at least from my initial impression (I've listened to it twice now), really does seem like the second part of the album that preceded it. Not much has changed, and that's fine. They're still tearing through the solos, going crazy from the speed of the riffs, and if anything, the vocals are bigger on this one.

"Dr. Stein" seems to the radio-friendly (ish) single on this one, and it's a pretty badass song. "March of Time" features some more sweet lyrics and some incredible (duh) guitar work. "I Want Out" is an early favorite of mine, a relentless song about being pissed that is reminiscent of "I'm Alive."

The title track here is the epic (13 minutes), a song that starts with (gasp!) acoustic guitar and builds into eventual dual-guitar-soloing awesomeness. Where Part 1 ended semi-quietly after the "long song," this one goes out with energy: "Save Us" is as cripplingly fast as any of the songs that preceded it.

This one is a two-disc set, and though the second CD is only a little over a half-hour long, it features some cool shit: three era-appropriate b-sides and remixes of "Dr. Stein" and "Keeper of the Seven Keys" that add some kick to the originals (from what I can tell).

I'm looking forward to getting to know this one much, much better.