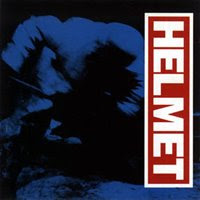 Given, I'm a 90's fanboy. But the fact that a band like Helmet could be legitimately popular (like, mainstream popular) is a tremendous testament to what a great time it was. In fact, it gets better every time I blindly romanticize it, so I will continue to do so.

This record isn't quite metal, not quite rock...I've really never known what to call Helmet. But if you like to get bludgeoned by your music, they're the band for you. I have no recollection of buying this CD. I feel like my brother had the cassette when it came out, and I know we definitely used to listen to it quite a bit. My CD is completely thrashed, which makes me think that someone either gave it to me, or I bought it for a buck because it seemed like something I should have. And I should have it, so I'm glad it's in my collection.

I saw Helmet open for Nirvana in the summer of 1992. Mudhoney had originally been slated to play, but after the show was rescheduled, they apparently couldn't make it. Helmet took their spot. I don't remember much about their set, except that Paige Hamilton was playing a hot pink guitar and he seemed to be in a half-crouched, almost basketball-defense stance the entire time, rocking back and forth and screaming, more towards the microphone than into it.

I remember thinking it was a great show, and I was happy to see them. "Unsung" will always be a quintessential 90's song to me, a track that all the new shit-rock bands have tried to replicate over and over and failed miserably. That song works the loud-quiet-loud technique to amazing effect, and it's rendered even more brutally brilliant by Hamilton's inimitable vocal style. Same with the rest of this record.

You have to be in the mood for it, but if you are, this is some fine, fine rockin'.

"In the Meantime"
Posted by Wockenfuss at 2:44 AM

This was one of those lucky judgement calls for me in my early music exploration. I remember seeing ads for it and reading a review of it when it came out and decided I would buy it, sound unheard. I vividly remember giving you money and having you buy it for me (I think I was only 13) when it came out. Needless to say I loved it. I rocked that tape super hard and still enjoy it now. The only downfall of the album is that many of the songs do blend together somewhat. Helmet had their own sound and pretty much did it over and over (at least on the first two albums, this being the second). "In The Meantime" and "Turned Out" are both show stoppers for me and "Unsung" is simply awesome.