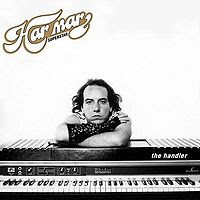 I have a vague recollection of purchasing this CD, though for the life of me, I can't pinpoint what led to me to do so. I think maybe I had a friend who played some of Har Mar's early stuff for me in his car one day or something and I thought I liked it...that sounds like something that may have happened.

As usual, it matters not. I realized quickly upon getting this home and listening to it that it was not at all what I expected, and I quickly shelved it away, to be forgotten until yesterday when I listened to it in my car. It's every bit as not-something-I-would-ever-listen-to as I remember it, and maybe even more so. I understand that it's semi-ironic, but perhaps I don't truly "get" Har Mar Superstar.

Upon listening to this for the first time in at least four years, I reaffirmed my stance of not having any desire to try to understand this, as it doesn't sound like much more than corny dance music to me. It's well done, I'll give it that, it's just not my thing.

The real question is how it's managed to sit on my shelf unnoticed for so long. I have a feeling it won't be there much longer.