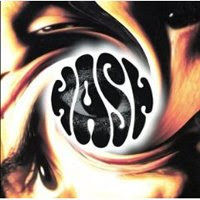 Ah, one of the great overlooked gems of early-90's rock.

I was just reading some reviews of this CD on Amazon, and folks seem as confused as me on the subject of why this album wasn't better received and why there's virtually no information available on the web about it. One reviewer suggests that "The band must have signed the 'no promotion' clause on their contract with Elektra," but I know for a fact that wasn't the case. Not only did Elektra promote this album prior to its release, they promoted it fairly hard. I recall seeing full-page ads for it in a few different magazines, and every once in a while, promo singles for "Twilight Ball" will show up on eBay. Apparently it didn't work, because this thing was relegated to cut-out status shortly following its appearance in stores. That's when I bought a used copy of the cassette.

The swirly ads had indeed intrigued me, and I was really curious as to what a band named Hash would sound like. Not surprisingly, they're slightly hippie-ish. Surprisingly, they're tight as shit and their sound is huge. I've never been able to find a band to compare their sound to, and I wouldn't consider this the kind of music I would normally get into. But get into it I did, as the tape spent some prime time in my car's stereo.

It took me a few listens, but I quickly learned to love the unhinged velocity of "Twilight Ball," the funk-wah of "Ghetto," and the grungy pop of "Mr. Hello." The album starts strong, but it just keeps going. I've been listening to this a bunch lately, and it's been front-to-back. It mellows a tad bit in the middle with "4:30am Hikes" and "Kit & Kaboodle," but it never really lets up. "In the Grass" almost has a coked-up blues rock vibe to it, but the chorus works the harmonies and the breakdown lets the bass do some strolling.

"Mary I Wanna" is the only song on this disc I'm not a huge fan of, as the verse lyrics are a bit corny and the guitar is a little too hippie-jamified. But I do like the chorus, now that I think about it... "Orchard Moons" features some bottleneck (I think) guitar that is toned perfectly, and it's followed by "Traveling," which is dirty with the guitars but smooth with the vocals–a great tune.

"I'm Down" is another funk jam, and not an unlikable one. But the last two songs are huge, five-plus-minute songs that close the album perfectly. "American Chorus" strives to be as big as its title, and it almost gets there. These guys were a three-piece, and I still don't know how they got their sound to be so walloping. The production on this whole album is meticulous, and that must be a big part of it. The drums are always very present, and it makes the every track hit hard.

"My Icy Death" is the big closer, and it may be my favorite song on this CD. Part of it is that I love the title (and the lyrics), but it's also because the track is relentless, powering through style and time shifts with ease. It's an ambitious cut, and they pull it off.

As I said, there is frustratingly little info about this band on the web. Seems like the bass player is playing in this band now, and I know guitarist/vocalist Seth Abelson and drummer Mike Caldarella went on to form Spirit Gum a few years later. What Abelson's been doing for the last 15 years is a mystery. If anyone knows, give me a shout out. And do yourself a favor: if you find this in the bargain bin, give it a shot. You might like it.

You can listen to short samples from Hash here, but that's about all I could find.
Posted by Wockenfuss at 3:18 AM

I agree with your review pretty much dead on. I always knew that this band was not for me yet I loved this album quite a bit. I remember that it was promoted heavily in print before its release. I always found it odd that their video (did they even have a video?) never found its way onto Bohemia. I proudly own the "I Forgot My Blanket" b/w "I Am The Walrus" 45. "Ghetto" is one of those criminally unheard gems from the era. Oh those crazy 90s!

Yep big fan in the UK here. Bought this when first released off the back of their link to the band White Trash. Superb band, quality musicianship, great songs and a killer sound. Such a shame they ended it all so soon. There was a single released too the CD of which had a couple of extra tracks. As you mentioned another band was formed after this collaboration and named Spirit Gum by Abelson and Caldarella. They also had another project which was never signed called 417, there's some videos on YouTube of that.

Yep big fan in the UK here. Bought this when first released off the back of their link to the band White Trash. Superb band, quality musicianship, great songs and a killer sound. Such a shame they ended it all so soon. There was a single released too the CD of which had a couple of extra tracks. As you mentioned another band was formed after this collaboration and named Spirit Gum by Abelson and Caldarella. They also had another project which was never signed called 417, there's some videos on YouTube of that.

Nice! Funny: "My Icy Death" came on in my car the other day on shuffle and it had been a while since I'd listened to the record; got me thinking about them again. Link to the 417 stuff?

Such a huge album for me in the 90s. Thank you so much for posting this. So glad there's a bunch of nerds reminiscing about Hash. Did they ever tour? Anywhere?

I played guitar in 417 with Seth, Erik and Mike and wrote most of the music for Kit & Kaboodle, as well as I Forgot My Blanket, including the intro solo to K & K, though without a sitar. The song titles were substance induced knee jerk utterances by me. Seth wrote the lyrics and we worked together to infuse the melodies he devised into the music I had mostly written. This was 1988. Seth and I had extremely strong, song writing chemistry and diverse influences, often writing all night in a state of substance induced enlightenment. As weird and confusing as the songs were, we remained highly conscious of providing catchy choruses. Many 417 songs were composed that are lost in time, despite my recollections of how to play them and the song titles. I wish I hadn't left when I did. In my not so humble opinion, I would have injected the forced name change Hash with an invaluable shot of energy and stage presence, as well as contributed to the song writing. Aaron, Mike and Seth are phenomenal musicians. The last hurrah was when they opened up for Metallica at Bowery Ballroom, 2003, with Erik on bass, under the name 417, once again. I joined them on stage but was far too rusty to contribute to the performance. I often ponder as to what could have been had I not veered in another direction.....

Very Cool, I just rediscovered this on my NAS, ripped all my cd's decades ago. Wonder what had become of the band, googling a bit this is the best info on Hash I found.