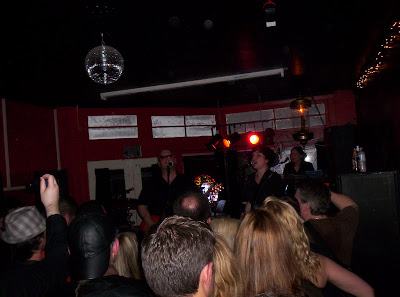 Frank Black–excuse me, Black Francis–living in Oregon has once again paid off for me, Salem style. After seeing him play acoustic at Guitar Castle about three years ago, and seeing him at a semi-secret show with his new not-the-Catholics rock band about two years ago (both shows were in Salem), I got to witness the unveiling of his new band, Grand Duchy, tonight. Grand Duchy is FBF (that's the easiest thing to call him) and his wife, Violet, though they had a few other folks playing with them tonight.

This was another semi-secret show, so I just learned about it a few days ago. I was able to score a couple tickets, and me and the lady (along with what felt like about two hundred other sweaty people) went and checked it out. I've heard the duo's new record, though only a few times, so I sort of knew what to expect. It's more Violet than FBF, so, y'know, there you go.

Salem locals LeNUNES opened the show, and they did a bang-up job. Their drummer is an ass-kicker, and as soon as the trio opened the show with the two frontpeople both playing basses, I was intrigued. They went on to switch up the instrumentation quite a bit between the two of them, and it made for a nice set.

Grand Duchy took the stage next, and the place was packed. Seeing FBF in such close quarters is always a treat, and on the few occasions where he let his yowl out, the scream was just phenomenal. I could listen to that all day. But, like I said, his wife does a lot of the singing in the group. I could still admire his guitar playing from across the room.

The band is an odd one: it doesn't sound like anything FBF's done before, but I get the vibe his wife is doing a lot of the songwriting, so that stands to reason. The songs are all markedly different from one another, which is fine, but there's really not much that holds them together. Maybe I just don't get it yet. Maybe...

I feel like I have some negative things I want to say about the show, but I'm not going to because it seems petty at the moment. I got to see one of my musical heroes in a tiny little venue, and I'm thankful for that. And really, I had a great time. I hadn't been packed in like a sardine at a rock show in a while, and it was good to be back in those sweaty quarters.

There were people there with video cameras, so I'm sure there'll be something up on YouTube soon. If you want to hear Grand Duchy (which is pronounced Dutch-y, btw), you can check out their MySpace page here.
Posted by Wockenfuss at 11:50 PM