The Jimi Hendrix Experience - Are You Experienced (LP, 1967) 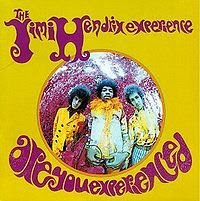 Previously, I had mentioned that there were three LPs that served as my earliest introductions to rock music. The Beatles' Hey Jude was the first, The Doors' eponymous debut was the second. This one represents the last piece of the trilogy.

I have to say, I was pretty lucky to be turned on to these three records at such an early age. While my parents had a bunch of other records (not a huge collection, but a varied selection), these were the ones I was drawn to, from as early as I can remember. I spent my youngest years listening to Elvis records, and though that's technically my earliest memory of hearing rock music, it was these three albums that I continued to listen to as I grew older. And I'll always have 'em.

Hendrix, along with The Doors, was initially too much for my prepubescent mind to handle. While The Beatles were easy to enjoy (the fact that Hey Jude was a compilation containing some of their early material helped), Hendrix and The Doors were obviously a part of something I had no understanding of. The first time I heard "The End" by The Doors, it startled me, enough so that I didn't listen to the LP (or at least that song) for a while after that. With The Jimi Hendrix Experience, it was a complete overload.

I remember being very young and seeing the LP cover for Are You Experienced every time it found it's way to the front of our horizontal, steel record rack, staring hard at me whenever I walked past it. Between the afros, the confusing outfits, and the fish-eye lens used to take the famous portrait on the front, it scared the shit out of me. I mean, it really creeped me out. I remember asking my mom what it sounded like, if she thought I would like it. She told me it would probably be too loud for me, or something to that effect. I was probably seven, maybe younger. I was feeling brave. I strapped the huge, cover-your-whole-ears Pioneer headphones on, and told her I was ready.

As soon as the first crunch of "Purple Haze" struck my ears, I realized I wasn't ready. It was like I wasn't able to process it, or didn't want to. I'm not trying to mystify Hendrix more than he already has been here; this is just what happened. I left the record on the shelf for years after that.

But, of course, like many young dudes, with my teen years fast approaching, the classic rock was right there waiting for me. (Do kids today still go through their Led Zeppelin phase? I'm so out of touch.) When I was finally ready to listen to Are You Experienced, I began to slowly understand it. And I began to love it. This is probably not my favorite Hendrix record, but it will always be "special" to me in a way that very few records are. I understand why it initially scared me ("Purple Haze" is quite jarring in the opening), and I understand fully why I wrapped myself up in it in my teen years ("May This Be Love" is arguably one of the most beautiful songs in the history of rock music).

People will always remember this record for "Purple Haze" and the few other classic rock radio staples, but it's the deeper cuts here that are the most mind-blowing. "I Don't Live Today" is incredible in both its scope and simplicity. "Third Stone from the Sun" is so far ahead of its time that it could have easily been a hit 25 or 30 years later.

There's not much to say about an album like this that hasn't already been said, so I'll leave it at that. I pray that you listened to this in your teenage years. It's really the best time for it. I still love this record, but when I was 14–holy crap.

I remember this record being in our shelves as a little kid and being really scared of Hendrix. Maybe its the fish lens. Who knows?