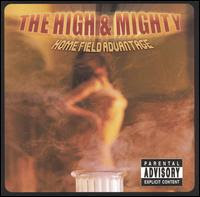 I've never been a full-on Rawkus Records fanboy, but in the late-90's, they made it hard to resist. I was late to the game on this one (shocking, I know), and it's still been growing on me for the last few years.

Honestly, I probably latched onto this initially because of "The Last Hit," one of my favorite '99-era Eminem guest spots, back when he was still a the funnest MC in the world to listen to. (Note to Em: as soon as you lost your sense of humor, you started going downhill quick. That new single of his is awful.) I can't believe I actually miss Eminem rapping about drugs: "I'm flabbergasted off two tabs of acid/ Threw my baby's mother in a hatchback and latched it." I get misty thinking about the good ol' days.

For some reason, I always feel a small bit of poseurism running through this record, but that's probably just my own delusion. I think I just hate to hear the word "honky" on record; it rarely comes across well. Anyway, that's my cross to bear.

If you see this record for a few bucks, it's well worth it.

I, like you, never fully sold myself on High & Mighty. I bought this cassette on the strength of the Rawkus connection (I loved the Soundbombing II tape) and rocked it for a while and then put it away for years. I bought it recently on CD, in the 2 dollar bin, listened to it briefly, and remembered what bugged me about it originally. Its average. The beats are not good or bad. They are just there. Mr. Eon's rapping is not what I would call groundbreaking. The saving grace? The guest spots. The collaboration songs save this one, with Eminem's being the obvious standout. That being said I never even thought to buy any of the group's later releases. So there's that.