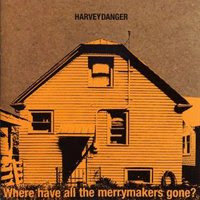 In the post-alternative/grunge/what-the-fuck-ever late-90's, "Flagpole Sitta" was an oasis in a shit-filled desert of songs like "The Freshmen" (fuck you, Verve Pipe) and "Closing Time" (fuuuuuck you Semisonic). I'll call it a guilty pleasure, I'll admit I love a song that was a huge radio hit, whatever–I think it's a fantastic rock song that I have listened to and sang along to many, many times. And really, that's OK, because the rest of this album is really quite good.

I was way late to the game with Harvey Danger, and I'm not even sure I bought this CD until I downloaded their 2005 album Little By Little... for free from their website and ended up liking it a lot ("Cream and Bastards Rise" is a great, great song). I had always heard they were more than a one-hit wonder, so I figured I'd give this CD a shot. (A note to prospective buyers: this disc ain't hard to find.) Maybe it's that I'm a sucker for NW bands, or maybe it's because I love unsucky music that is directly descended from what I consider the best rock music of my lifetime (early-90's NW rock), but I took a short-lived liking to this album.

Some of the lyrics are a little heavy-handed for my taste ("Problems and Bigger Ones" is a spotty almost-six-minute number that fucks up the flow of the album right in the middle), but "Jack the Lion" and "Woolly Muffler" are musically and lyrically strong. It's just rough, because none of 'em have the same "oomph" as "Flagpole Sitta." To me, that's not necessarily a bad thing, but it seems a group like this will always have to live in the shadow of that one tune. It's too bad, because they've got some other songs that are solid, too.

"Private Helicopter"
Posted by Wockenfuss at 2:41 AM