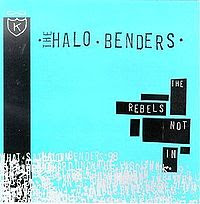 I just found this LP a few weeks ago (good timing!) and this is definitely the Halo Benders record I've listened to the least. I think I may have had a dubbed copy of it at some point, but I'm not as familiar with it as their first two.

One thing that's clear right from the beginning of "Virginia Reel Around the Fountain" is that they've stepped their fidelity game up. This record is a lot cleaner and crisper sounding than their other ones, which may, strangely enough, be a downer for some people. If some of the songs on their previous efforts had a Built to Spill influence, this record sometimes sounds like Calvin singing along with BTS. The guitar parts on "Lonesome Sundown" are way more complex than anything the band had done before, and in fact, the entire arrangement is.

So, yeah, maybe this isn't your favorite Halo Benders record if you fancy yourself a purist. However, if those lo-fi sounds were a bit much for you to handle, this one might be a bit more to your liking. Martsch's vocals are much smoother in these songs, and it adds a lot to the melodies that carry the tunes.

Some of this stuff just straight up doesn't sound like The Halo Benders at all. "Bury Me" is fierce in comparison to their usual sound, and clearly more attention has been paid to tones and the recording process in general. It's followed by "Surfers Haze," which has more of a Benders vibe, with the acoustic guitars layered awkwardly. I'm still not sure if it's a direction I was waiting for the band to take, though.

The songs seem generally longer on this LP, too, and the album itself is noticeably lengthier than their other ones. You can see this same progression ("better" recordings, longer songs) in Built to Spill's albums as well, so I can't help but think that ol' Doug had something to do with this. Who knows.

I guess it depends on what you're looking for. I could see this being either somebody's favorite Halo Benders album, or the one that negates the entire concept of the band. Or you could be like me, and not worry about that shit and just enjoy it for what it is. There really are some great songs on this one.

"Virginia Reel Around the Fountain"
Posted by Wockenfuss at 3:11 AM

I have always been torn on this one. There are songs I love but for the first time on a Benders record there are songs that I am not that crazy about. Is this a bad record? No. It just follows two stellar records and does not really live up. The songs seem much more focused and worked out, which is a bummer as the half finished feel of the first two (especially "Don't Tell Me Now") really added to their charm. Part of me has always felt that the Benders really dropped the ball with sequencing on this one. "Virginia" is a great song but is just too long to be an effective opener. On the other side, why is "Foggy Bottom," possibly the best song on the record, tucked away at the end? Another thing holding this one is the lack of Doug's vocals. Not that he isn't here, but there are more than a few songs that are strictly Calvin, yet another departure from the first two. There are some real clunkers here. Would the album have suffered without "Surfers Haze" or the 6 minute instrumental "Rebels Got A Hole In It?" Absolutely not. "Devil City Destiny" and "Turn It My Way" seemed phoned in. However, there are some great songs here. The aforementioned "Virginia" and "Foggy Bottom" are awesome are as "Bury Me," "Your Asterisk" and the genius "Love Travels Faster." My take on making this one much better? Lose "Surfers" and "Rebels," rearrange the track order and your pretty good to go.