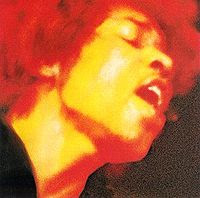 First off, let me say that this is a fantastic record. It's probably my least favorite of the albums Hendrix released during his lifetime, but c'mon: it's Electric Ladyland, for cryin' out loud.

Having said that, I've always had to be in right frame of mind, with some serious time on my hands, to really take this one all the way in. And even then, sometimes it proves to be too much for me. Part of this can be contributed to the two ultra-long jams it contains ("Voodoo Chile" and "1983... (A Merman I Should Turn to Be)"), and part of it might be that I have always felt this album was sequenced strangely. Of course, this was in the days of vinyl-only, so when you have songs that are 13-minutes-plus, it limits your options in fitting songs on sides of records. Anyway.

This record also contains some of my favorite Hendrix songs. "Crosstown Traffic" is classic Hendrix, and so is "Gyspy Eyes." But the more Jimi leads the band towards blues, the more I lose interest. That's just personal preference, and I realize it's a bit ridiculous. But I've always felt like that. I had a copy of this when I was younger (I just re-bought the CD), and I recall feeling the same way. It just never had the same flow for me as his previous two records.

Of course, tracks like "Long Hot Summer Night" and "Burning of the Midnight Lamp" still sound fantastic. And while I could do without "All Along the Watchtower" (I have always maintained a senseless aversion to that song, in all its forms), closing the record with "Voodoo Child (Slight Return)" is impossible to deny. It's a jam that never gets old.

Again, I'm in no way attempting to be critical of this record. It's just never been the first one I reach for when I want to hear some Jimi. So, there you go.

"Burning of the Midnight Lamp"
Posted by Wockenfuss at 2:17 AM