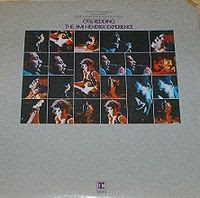 This is a split between Hendrix and Otis Redding, so here's what I'm going to do: I'm going to talk about the Hendrix side here, and I'll wait to do the Otis side when we get to his stuff (I'm already looking forward to that).

So yeah, these are four songs from The Jimi Hendrix Experience's legendary set at Monterery. Why they waited until three years after the festival to release this is anyone's guess, but I think it ended up being the last official Hendrix release before he died, so that's something.

Of the four tracks here, only one is a Hendrix original, a rowdy version of "Can You See Me," a track that was only released on the UK version of the group's debut. So, that's a solid selection, if not a bit of a strange one. Jimi's takes on "Like a Rolling Stone" and "Wild Thing" have never been favorites of mine, but these versions do have more appeal considering the importance of the performance.

The real winner here, and easily the best song of the four, is the group's version of "Rock Me Baby," a blues number that's been recorded a million times, but never like this. Hendrix sounds so out of it when he's introducing the number, but as soon as he wrenches into the opening riff, he's perfect. If you ever wonder why people worship Jimi like he was a god, check out that song. It's one I'll never get tired of.