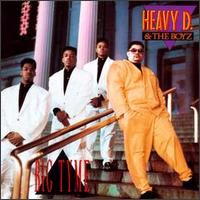 I had a K-Tel cassette rap compilation when I was in my early teens that had the seventh track from this record, "Gyrlz, They Love Me," on it. I thought it was the shit. Looking back, I have no idea why. It's a pretty weak track. Though, in the throes of puberty, I was a sucker for any song about chicks putting out, especially one that played it a little blue.

So, there's that. I didn't pick up this CD until recently, and I've listened to it more times than I thought I would. Hev's not the greatest rapper (it was always way more impressive to watch his fat ass do the Running Man), but he holds his own. "We Got Our Own Thang" is a solid upbeat opener, and "You Ain't Heard Nuttin Yet" follows it up on the mellow tip.

But from there, Heavy falls prey to the 80's rap formulas. "Somebody for Me" is the peppy song about relationships; "Mood for Love" is the ragga track on which Heavy exploits his Jamaican roots and embarrasses himself. "A Better Land" is the let's-get-our-shit-togther-and-make-a-better-nation jam, and "More Bounce" is the dance number. Actually, I like that song. And the two that follow it are solid, too ("Big Tyme," "Flexin'"). "Here We Go Again, Y'all" and "Let it Flow" round the whole thing out with some more dance-worthy beats.

So yeah, it ain't bad, but it'd be much better if I could watch Heavy doing his dance moves in that huge yellow suit.

God, I used to love that "Gyrlz, They Love Me" cassingle.