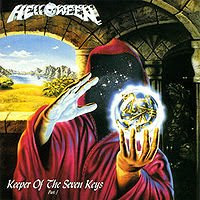 Here's the deal on Helloween: they're awesome.

A few things led me to purchasing this CD, as well as the one in the next entry.

I am an avid watcher of VH1 Classic. (Actually, I was. I had to get rid of the channel in order to "save money." It's torture. Anyway...) And while I like most of the station's programming, I have always considered Metal Mania far and above my favorite block of videos they offer. If you've never sat in the dark watching W.A.S.P. videos at 4AM on a Wednesday morning, you're just not living right. And while I like the standard 80's metal they often show (I'm actually a bit partial to thrash, as well), it's always been the Power Metal videos that I enjoy the most.

They're few and far between (especially if you don't classify Iron Maiden as such), but well worth the wait. My brother and I were watching VH1 Classic in the middle of the night last year, marveling at the beauty that is Metal Mania, when the video for Helloween's "Halloween" came on. I think we were about two and a half minutes into the video when we both looked at each other and said, "Well, this rules."

Now, it's not like I had never heard of Helloween. While I'm not a metal expert, I don't consider myself a complete slouch. It also helps that part of my job entails listening to metal music. And again, the power metal (usually the stuff that's a bit lighter on the symphonics) is inevitably the music I dig the most. A lot of the bands I discovered through my job compared themselves to Helloween, and from there, it just kept clicking. I read their Wikipedia page, began to familiarize myself with their different lineups and eras, and became more and more intrigued.

It all came together with the purchase of this CD for my brother as a Christmas gift. I was looking for an early album, and I figured the one with "Halloween" on it would be a good way to go. We had a bit of a chuckle during the exchange, but it was understood that we were both dying to hear what the album contained. We would not be disappointed.

After the aptly titled and eerily foreboding "Initiation," a short intro that merely hints at what the band is capable of, they segue seamlessly into "I'm Alive," a propulsive track that wastes no time getting into the immense chorus. It's an incredible track, both in composition and execution. There's a short second of silence between this song and "A Little Time," which is, for better or for worse, the most accessible track on the record. The "power" is scaled back for four minutes and the band take a more straightforward route. Not why I bought this CD, but I actually like it quite a bit.

Any radio-friendliness is wiped immediately clean by the onslaught of the wonderfully titled "Twilight of the Gods," a furious track that features a creepy dude lurking over the top reciting things I don't understand ("Insania 20 16"?). "A Tale That Wasn't Right" would be, for a standard metal band, the song about some chick. Helloween has no time for that shit. Instead, vocalist Michael Kiske wails away about pain and loneliness. It's followed by "Future World," a track that stands out as one of my favorites, both lyrically and guitar-wise. It's incredible.

But the real madness lies in the album version of "Halloween," which becomes a 13-minute epic that is almost incomprehensible in both structure and ambition. It's one of the most insane guitar-wielding experiments of sound I've ever heard. The album proper ends with the next track, the comedown that is "Follow the Sign." Seems more like a bridge to the next record than anything. Still, it's creepy-awesome.

The bonus tracks here are a mixed bag, but only in their origins. They're all definitely worthy of being included here. "Victim of Fate" is a seven-minute b-side from this era, and while you can see why they left it off the record, it ain't too shabby. There's also a remix of "Starlight" from their first record (apparently it was a b-side to the "Future World" single, so that's why it's included on this collection), a shorter, rougher version of "A Little Time," and the video edit of "Halloween" (nice to have, I guess).

This band is quickly becoming my new favorite thing. It's never too late, people.

"Halloween"
Posted by Wockenfuss at 12:41 AM

Might this be the greatest album of all time? Probably not, but it is insanely good. I say that with total non-irony. I listened to this maybe 15 times this weekend and was constantly blown away by just how good it is. It is metal perfection: everyone is wanking but not in an obnoxious way. The guitar players consistently remind you that they are waaaay better than you and pretty much anyone on the planet. The drummer and bass player do the same thing. And, wouldn't you know it, so does the singer. Dude is like Steve Perry on speed. "I'm Alive" and "Future World" are unstoppable. "Twilight of the Gods" is simply overwhelming in its sheer power. And what to say about "Halloween" other than that it is epic in every sense of the word. The thing that impresses me most is that at no point do you feel like you are listening to a 13 minute song. There is no filler. It somehow leaves you begging for more. I never thought I would dig this band this much. It is never too late I suppose. I can't wait to hear what they bring in Part 2.