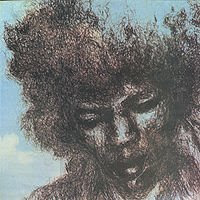 The first in what would become a shit-ton of posthumous Hendrix releases, this is apparently some of the stuff Hendrix was planning to put on his next solo record. Sadly, it sounds more exciting than it is. Not that this is a bad record, and in fact, it gets away from some of the bluesy stuff he was tinkering with, but it's just never caught on with me.

And I don't really know why, because the songs are all quite fine. I think a lot of it is just too mellow for me, or maybe it's that it's just different. The tracks are way more produced, and it seems that Jimi's guitar is running through effects that seem out of step with his usual raw sound. A track like "Ezy Rider" is certainly not without some really tremendous parts, but the slick treatment it gets just mutes the feeling more than anything.

The same thing happens, though to a lesser extent, on "Night Bird Flying." Hendrix's solos are mean, but they often get tucked behind a weird wall of indecipherable sounds. I've often wondered if the songs weren't quite finished, or if this was really the direction Hendrix was taking his music in. Again, they're not bad, but for some reason they just don't get to me like some of his other stuff.

The key tracks here are "Friends," a playful track that is great simply for its laid-back approach, and the wonderfully titled "Belly Button Window," reportedly the last song Hendrix "finished" before he died. It's very personal feeling, lyrically simple, but slyly beautiful. If that's the one he went out on, it's a good one.

"Drifting"
Posted by Wockenfuss at 1:46 AM