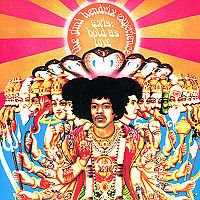 This is Hendrix's best record.

I'm just going to put that out there right away. While you could argue that Are You Experienced was more important (and I'd probably agree with you), this, to me, is Hendrix at his finest. Created quickly after their debut (and released in the same year overseas), this record features a Jimi who's still out to prove himself; a man who learned a few things from his first record and made the little tweaks necessary to crank out an album that is a knockout from start to finish.

While parts of his debut sound a bit rushed (I'm not knocking that record at all, I'm just sayin'), and Electric Ladyland is at times too sprawling and hints at Hendrix indulging himself and possibly losing sight of his original concept (we'll talk more about that), Axis: Bold as Love is concise, unbelievably brilliant, and essentially flawless. Maybe it's because I'm just as fond as Jimi the songwriter as I am Jimi the guitar player. Maybe it's because I think "One Rainy Wish" is an absolutely perfect song in every way. Maybe it's because I had spent a lot of time in my youth listening to the first record, convincing myself that it couldn't possibly get any better than that, and when it did, I became convinced Hendrix wasn't from this planet.

Fittingly, the spaced-out intro to this record, "EXP" (which must have sent many an acid tripper either into the stars or contemplating reality in way they had never hoped to), starts off with a surreal interview on the topic of UFO's, and sets the stage nicely for a record that feels very above-the-earth. The swirling feedback of that song is so fantastic, a quick-building chaos that is both frightening and pretty.

When it settles and the shuffle of "Up from the Skies" starts up, it's a mix of calm and surreality, with Hendrix's vocals sounding as smooth and sincere as they ever did. It's followed by the drum-heavy (and everything-heavy, really) boldness of "Spanish Castle Magic," a track that features some mean guitar work (no shit?). "Wait Until Tomorrow" might be a bit poppy for some, but the one-two punch of that track and "Ain't No Telling" has always been a favorite combo of mine.

"Little Wing" is a Hendrix classic, a song that is contained to two-and-a-half minutes here, which must have been a struggle. The first side closes with "If 6 Was 9," a bluesy track that thrives on some enthused vocals from Hendrix, as well as some great lyrics. When you're a teenager, this is a great song to choose as your personal anthem. I'm sure I did for a day or two.

The second side opens with some more of Jimi in pop mode, with "You Got Me Floating." I will concede that this track comes off as one of his most formulaic, but his guitar playing completely makes up for it. "Castles Made of Sand" is probably my least favorite track on this record, but I think that's because it was one of my favorites 15 years ago. "She's So Fine" is one of the odd Experience songs with Noel Redding on vocals, and I've always liked it. His voice sounds wiry thin compared to Hendrix's, but this song is well put together.

"One Rainy Wish" reminds me a bit of "May This Be Love," but only in its light tones. It's hard to say which I like better, but it doesn't matter. "One Rainy Wish" is perfect, sounding as spaced-out as the rest of the record, but also very "together." It's followed by "Little Miss Lover," a track that is maybe the least notable of the bunch, but still solid. Of course.

"Bold As Love" kicks in abruptly, with Jimi sounding abrasive in the opening lines, than calming considerably. This is clearly Hendrix imitating Dylan, but that's fine, because he always did Dylan better than Dylan could ever had hoped to. And here, he's written an anthemic number that sums up the preceding tracks in one four-minute stroke. It may be slightly nonsensical, but fuck it: it's tremendous.

So, there you go. My favorite Hendrix record. And I say that with confidence.

"Up from the Skies"
Posted by Wockenfuss at 1:16 AM