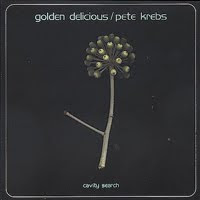 I realize this entry seems a bit out of alphabetical order, but I keep it filed under "Krebs, Pete," so that's why it's coming now. Deal with it, won't you?

Also: I always thought this was a self-titled album, but I guess it really is called Cavity Search. That's the label that put it out, so I figured that's why the name was on there, but Cavity Search's website has the album listed as Cavity Search, so we're going with that. I know you were all very interested in that technicality. On to the music.

Golden Delicious was (is?) a jammy bluegrass pickin'/strummin'/washboardin' group that Pete Krebs seemed to be in most of the time, but not all of the time (correct me if I'm wrong about that). I tried my best to embrace their music as much as Pete's solo stuff, but it never got to me the same way. However, this album has, for my money, their strongest set of songs. This disc is broken up into two parts: Golden Delicious with Pete Krebs on the first five tracks, and Krebs solo on the last four.

The opener, a reworking of the traditional "House Carpenter," is the highlight of the album, and a great way to start it off. Rousing and rambunctious, the song is not something I would normally consider my cup of tea, but I love it. Pete used to play it live by himself, and while it was tremendous to watch his hands work frantically to keep up with the peppy pace he chose for the song, it's really in its most wildly refined glory here. The next four songs are more violin-dominated and lots of fun. I hate to compare it to "Man of Constant Sorrow" (O Brother, Where Art Thou? style), but they do sound like that.

Krebs' four songs at the end are reminiscent of his Brigadier recordings, sparse in arrangement but still plenty wide with feeling and melody. "Ashes Back to Vegas" and "Dressed to the Nines" would appear in fleshed-out versions on his next LP, but the rambling anthem "America" and the poignant "We Never Sleep" are exclusive to this collection.

All four songs are good ones, and they each work as a fitting lead-in to his ambitious next project, which must have already been in the works.

Again, I can't find any damn tracks for this one.

Listen to some clips here.
Posted by Wockenfuss at 12:49 AM

I don't know why but this one has never really done it for me. The Krebs solo tunes are OK but I would leave them at that. As for Golden Delicious, lord knows I have tried to like them but they are just not my thing. I'm with you in that I love "House Carpenter" but I would much prefer the Krebs solo version. When I saw him play at the Willamette Coffee House in Salem he opened up with it and I knew it was on. Why is Pete Krebs a stallion? Because that night he played for over 2 hours. For about 40 people. It was incredible. I was the idiot yelling out random songs. I'm an idiot.