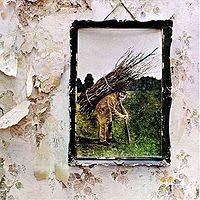 Well, here it is folks, THE GREATEST ROCK & ROLL RECORD OF ALL TIME.

My introduction to Led Zeppelin (I probably should have mentioned this earlier) came via their box set. Which would have made me about 14, maybe 15. A little late, I know. A friend at school had it on cassette, and he lent me one tape at a time, probably in exchange for Doors cassettes. Since Jimmy Page is a nut, the box set is not sequenced chronologically. We'll get to that. Anyway, I heard "Stairway to Heaven" out of context, though it is surrounded by songs from roughly the same era. I realized, upon hearing it for the first time, that I had never heard the song before. I had heard people talk about it, and I assumed that I had heard it but just didn't know the title. Nope, didn't recognize it.

And what a letdown. It's some drawn-out mystical bullshit. In fact, this whole record has such a lame wizards & warriors vibe to it that it shouldn't really be enjoyed by anyone over 17. With the exception of "When the Levee Breaks," which rules, and is easily the best song on this record.

Of course, I still firmly believe that every teenage boy should own a copy of this. Because it is some cool shit when you're still discovering rock music, and still naive enough to believe that Zeppelin were some fame-shunning band of misteriosos who refused to release singles and lived in some fucking cottage and practiced black magic or whatever.

Speaking of, I heard if you get high enough while listening to Zeppelin IV, you can actually convince yourself that the Page/Coverdale collabo never happened. Is that true?

"When the Levee Breaks"
Posted by Wockenfuss at 2:03 AM

I have a distinct memory of looking at this record at Uncle Craig's house and being fascinated with the fact that it never said who the band was. Someone, either Craig or Lori, explained that it was because Zepp wanted the album to be accepted on its own merits or something like that. When I was 12 I thought that was awesome. When I was 15 I realized that it was idiotic. Also, "Stairway To Heaven" is the worst song ever. At the very least it's up there with "Drink, Smoke, Fuck" by the Rza.