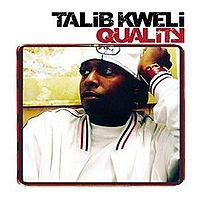 I somehow got a free edited copy of this album when it came out, and though I tried my hardest to embrace it, the edited factor ended up annoying me and I didn't really rock it too thoroughly.

Listening to it now, I definitely recall a lot of the tracks on the album, but apparently I never liked it enough to ditch the edited version in favor of the standard one. With a record like this there isn't a whole lot of swearing to begin with, but on some of the cuts there's definitely a lot of cut-outs and reverse scratchery.

I dig Talib Kweli, but I've just never been a huge fan. I don't know what it is. I just listened to this all the way through, and most of the beats are solid and the rhymes are totally fine; I guess it just doesn't get me too enthused. Some of the hooks are a little too R&B-ish for me as well, but that's a minor gripe: it's hip hop from 2002, after all.

Still, I've held onto it over the years, so that's gotta count for something. Just another one that I don't find myself reaching for too often. Though I always feel like I should... I'm supposed to really like him, right?