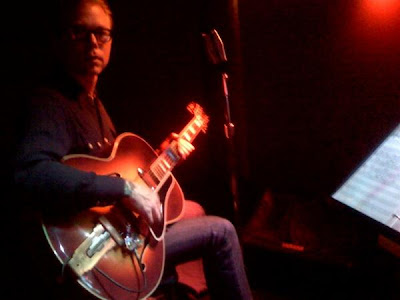 As if my feelings on the man's music weren't abundantly clear. Figured I'd punctuate it thusly because we've already covered Hazel and his solo stuff, and I'm pretty sure I don't have a proper copy of the Thrillhammer record (though I should...).

He's a great musician, a tragically underrated songwriter, and he was always really nice to me when I would request songs and nerd out to him at the solo gigs he played.

For further Pete Krebs info, I suggest this five-part interview he did with the Willamette Week's Local Cut a few years back:

It's a long series of interviews, but really well done and incredibly informative. There's an annoying absence of Krebs-related material on the web, so this is a damn fine resource to have.

I also just remembered that one night in 1999 or 2000, my friend Aimee and I – while sitting and watching Pete play – made up a Pete Krebs drinking game. I think we might have called it "Shy Town" or something like that. These are the rules, and probably won't make a lot of sense unless you know his music. This game works for both Hazel and his solo stuff, but maybe better for his solo works.

When listening to/watching Pete Krebs play, take a drink every time he mentions:

- Telephones. In any capacity. Them ringing, someone calling someone, etc.
- The highway. Or any long stretch of road.
- Alcohol or smoking cigarettes.
- Driving a car. Or the dashboard of a car.
- Hearts or valentines.

Also drink every time he does ba-ba-da-da type vocal part.

Now put on Sweet Ona Rose and have yourself a good time.
Posted by Wockenfuss at 1:41 AM

That Pete Krebs drinking game sounds unfair. Just the "telephone" aspect alone is dangerous. If you are curious I actually own a proper copy of the Thrillhammer CD. It is interesting but not as great as you want a Pond/Hazel collabo to be. I also have the Thrillhammer 45 which have different versions of songs from the CD.

Once again, I would venture that people outside of the NW might have a hard time understanding the fanboy type adoration that we throw on Pete. Why though I will never understand because, to me, Krebs' voice is silky smooth and he writes catchy melody after melody.

When in doubt, throw in some ba-da-das.