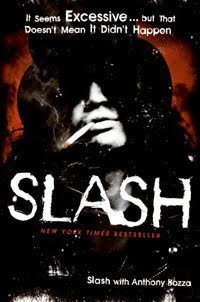 I'd been wanting to read this book since it came out, but I had no intention of shelling out twenty-some bucks to do so. Instead, I waited almost two years and was able to get it from Amazon for like five bucks. And it was worth every penny.

I'm not a huge Guns 'N Roses fan, nor am I particularly a Slash fan. I usually enjoy the music he makes, but it's gone no farther than owning a copy of Appetite for Destruction. Though I am familiar with the more well-known tracks from the two Use Your Illusion albums, so that helped me a little when he was talking about that era of his career. I'm getting ahead of myself.

This is, in many ways, probably exactly what you think it is: the story of Slash's life from birth to present, warts and all (literally, in fact). And while the tales of debauchery are certainly omnipresent throughout this surprisingly long book, there's also insights that come from Slash the Musician that are equally interesting. Hearing how Guns came up with some of their most famous tunes makes for some cool rehearsal stories, as does the first person accounts of the inner workings of one the world's most dysfunctional bands. (Spoiler alert: Axl is a diiiiick.)

This book was every bit as good as I hoped it would be, and maybe even a little better. You don't have to be a fan of the music to enjoy it, and Slash's writing style keeps the whole thing casual, which becomes inherently necessary when dealing with some of the unbelievable shit this dude has been through.

Notably unbelievable: That Slash is alive; that Steven Adler is alive; and that neither of their dicks fell off. And really: I knew Axl was a nut, but this book, by just pulling together well-documented facts, a few new ones, and offering some asides about them, really doesn't leave any mystery as to why Guns 'N Roses broke up. In fact, it seems a miracle that they stayed together as long as they did.

I highly suggest knocking this one out over a long weekend.
Posted by Wockenfuss at 1:26 AM