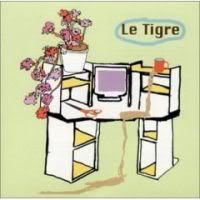 I always associate this EP with Le Tigre's first album, but it actually came out two years later, the same year as their second. But, it contains a remix of a song from their eponymous debut, so maybe that's why. Maybe that's not important. Anyway.

Though not as substantive as their first record, this short collection of songs is still great. "Get Off the Internet" really rubbed me the wrong way at first, but I've learned to love it. That track sounds like it could have been left off their first album; the rest are an odd mix of styles. "Bang! Bang!" is aggressive and rough, even for them. "They Want Us To Make A Symphony Out Of The Sound Of Women Swallowing Their Own Tongues" is a sample-based blipper that doesn't feature any vocals. "Yr Critique" is a lo-fi rocker that uses more guitar (or at least guitar samples) than most of their stuff. Another great song.

"Gone B4 Yr Home" rocks it full-on Casio demo-style, and it might be the best song on this album. The music is cute but the lyrics aren't, and it's a sweet juxtaposition. "Mediocrity Rules" is another guitar rocker, and actually sounds a lot like "Yr Critique," but with a heavier synth presence. Sweetness. "All That Glitters" is actually a remix of "The Empty" from their first album, and though it's good, it feels like a tacked-on bonus track.

"Mediocrity Rules"
Posted by Wockenfuss at 1:21 AM