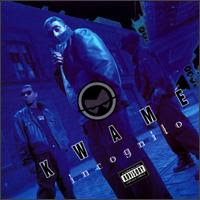 Kwamé's back, and he's got a dark new look. The fade has been retired in favor of a close-cropped Caesar-ish cut, and black leather has taken over for the neon.

It must have been rough being Kwamé in the mid-90's. Reinventing yourself as an artist is a daunting task, and trying to shed the image of a sex-you-up dance fiend is a tall order. So, the fact that this record doesn't suck is impressive, but it's not surprising that it didn't have much commercial success.

Poppy beats have made way for thick drums and echoing vocals, and the beats are way less crowded. Lots of barren bass lines and far-off horns. Very '94, and he pulls it off well. He does seem a bit more serious, but for the most part his rhymes are still filled with come-ons to the ladies and a general desire to have a good time.

Nothing wrong with that, but he again slips into the R&B side of things towards the end, going for a New Jack sound that doesn't quite come off correctly. Still, the first five tracks or so ain't bad at all. I think this was his last record as a solo artist, and that's pretty nuts considering he was only around 21 when this was released. Dude's only in his mid-30's now. And he's still banging out tracks behind the scenes.

So don't you dare diss Kwamé.

Think you might be able to listen to some tracks here.
Posted by Wockenfuss at 2:05 AM