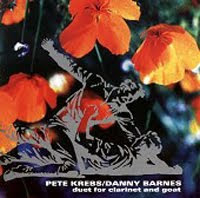 I'm pretty sure Pete Krebs and Danny Barnes spent a long weekend together and just decided to knock out an album while they were kicking around.

Barnes, as far as I can tell, is a banjo strummer. He twangs away all over this thing, although it's hard to tell who's doing what most of the time. There's drum machines mixed with acoustic guitars and distorted vocals, random percussion elements trickling in and out.

This album is fun for what it is, but I never really got too into it. It's a side project in the loosest sense of the word, in that it's clearly a one-off thing that two pals collaborated on. So, for that, it's a nice window into explorations in home recording limitations and makeshift musicality, but there's not a whole lot of cohesion to it. And that's fine: I don't think there was supposed to be.

And hearing someone else sing "Jilted" is just weird. But hey, this whole thing's supposed to be goofy. And it is.
Posted by Wockenfuss at 1:48 AM