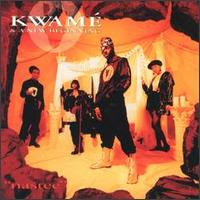 Kwamé could rock the hi-top fade with the bleached streak like nobody's business, and this would be the last album on which he'd have the chance to couple it with polka dots and some bouncy beats of the unapologetic variety.

His strength: dance beats that are the epitome of fun-time hip hop in '92. His weakness: dumb sex rhymes that sound like they're coming out of the mouth of a thirteen-year-old. So, some of this record hasn't aged particularly well. Not shocking, considering this was an incredibly transitional time for hip hop. Kwamé's haircut would be out of style by the end of the year, and song titles like "Wakeupscratchyobutt!!!" would be thrown out right along with "Doowutchyalike." Unfortunate, but this was the rough-and-tumble 90's. We were finicky, and all of a sudden pajamas weren't cutting it for rap fashion.

I'm getting ahead of myself. This record came right at the end of the baggy neon era, and brought some beats that are partytastic. "Dontmatta" rides a piano loop and hits the horns hard, and is a great song. The title track shows Kwamé flexing varied vocal styles, and he roll with 'em all. It's got a Dana Dane feel to it, and that's cool by me. "Ding Dong" is weak with the hook, but the rhymes are there and the beat thumps.

"Love in F/X Minor," an attempt at an abstract skit that goes on three minutes too long, brings things to a screeching halt, but the three tracks that follow it bring things back up to speed. "Thatthewaydatitgoez" flips the R&B switch, and once it's buzzing, there's no going back. The final four songs ham it up with hook-heavy approaches over pop/dance beats, and the whole thing fizzles out.

But I can still dig on the first half.

"Nastee"
Posted by Wockenfuss at 1:31 AM