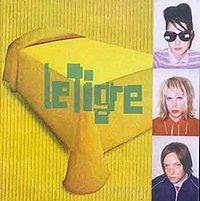 I never planned on being a Le Tigre fan. It wasn't that I had anything against the band. I just, like I do with pretty much every band that I hear people talking about, assumed that I would hate it.

The girl I was with in the early 2000s was big-time into Kathleen Hanna. She loved Bikini Kill, and always talked big about Julie Ruin (Hanna's solo project between Bikini Kill and Le Tigre), but had lost the album. I wish I would have heard Julie Ruin first, because then I might have been excited about Le Tigre. I never really cared for Bikini Kill, so I didn't expect much from them. Which makes no sense, because even then I knew the styles of music weren't comparable. I'm just a jerk like that. And like most jerks, I thought Kathleen Hanna was hot, and it made it hard to take her seriously.

My lady friend bought this CD when we were out record shopping one day and I rolled my eyes. Then she played it when we got home and about 45 seconds into "Deceptacon" I realized I owed her an apology. And I did apologize. And after hearing the whole record, I had no choice but to admit that I liked it. I really liked it. And I still do.

I'm not sure if you'll hear much argument from anyone on the subject of whether this is Le Tigre's best album or not. It just is, and I'm fairly certain that's the consensus. Their other records are solid as well, but this one is so good that I'm not sure they ever had a chance of topping it. Yeah, it's fucking dance music, but it's a lot more than that. It's ardently feminist without being annoying. It's slow and surprisingly pretty in parts. The beats are put together really well. And there's not a stinker in the bunch.

It's nice and short, and damn fine when played from beginning to end. And you can't ask for much more than that.

And chicks dig Le Tigre. So you're in, bro!

I don't know why I don't listen to Le Tigre. I celebrate Bikini Kill's entire catalog (especially the excellent "All-American Reject") and had numerous boyhood fantasies about Kathleen Hanna stemming from the "Bull In The Heather" catalog. I think there were/are two things that make me not listen to them. One is that they were really hyped and I, like you, am the type of cool guy to hate a band on principle. The second reason was the inclusion of a band member who did not actually play music. While I inexplicably give Hazel a pass on this I think that is a hugely lame thing to do (I'm looking at you Prodigy). Anyways, one of these days I will probably chill out and listen to them. So, yeah.