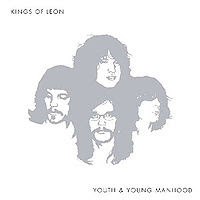 Aside from the terrible title, this still remains a good album. Four of the five songs from the Holy Roller Novocaine EP are presented here, and I think they've all been revamped. They add seven more tracks (eight including a hidden one tacked on at the end), and they're all solid enough.

Now that I think about it, this was the last Kings album I purchased, so maybe I didn't love this as much as I think I did. Actually, I remember what happened: I went to see them in Seattle with The Strokes (yeah, I like The Strokes, deal with it) and they (Kings of Leon) were dicks. They kept whining about the venue and berating the audience. Normally I don't give a shit about stuff like that, but it seemed a bit cocky coming from a band who had just released their debut, and from what I could tell, really wasn't blowing up the way everyone had expected them to. I remember being really put off by the whole affair, and not giving too much of a shit when they dropped their next record.

Now of course, they're oily bros who have finally become the arena rock stars they wanted to be, but I have to admit: this record still makes for a good listen. The best songs are the ones that were on the previous EP, but the other tracks aren't shabby at all. The guitar tones are grungy/twangy good, and the songs don't fuck around, which is a plus.

At what point did they start wearing sleeveless t-shirts and getting fancy little haircuts? Eh.

"Wasted Time"
Posted by Wockenfuss at 1:16 AM