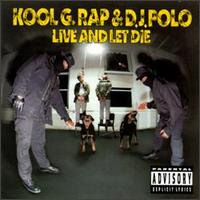 Make no mistake: this is some hard shit.

When one thinks of gangsta rap (the real shit – the early shit) at its hardest and rawest, this record should be near the top of the list. But because it was so damn hard to get a hold of for so many years, I don't think it ever got its just due. I lucked out and scored a copy a few years before they reissued it, and didn't have to pay the thirty or forty bucks it was going for on eBay at the time. And I'll be holding onto this one until I decide to fork out the dough for the vinyl.

It's a damn shame that this is the only Kool G Rap and DJ Polo album I have on CD right now. I have Road to the Riches on cassette, but that's never been enough. Need to pick up that, this one, and Wanted Dead or Alive on vinyl real soon. Add it to the list.

Hearing the progression of Kool G Rap over he and Polo's three records is an interesting study. He gets progressively better as an MC, and progressively rougher as a streetwise motherfucker. While he started to show signs of hardening on Wanted Dead or Alive (after keeping shit relatively mild on Road to the Riches), on this record he's in full-on Tony Montana/Godfather/Shoot-you-in-the-fucking-face mode. And it's brilliant.

Apparently Warner Bros. had an issue with distributing this record, and while the content doesn't seem crazy over-the-top by today's standards, this was some rough shit for '92. It's right up there with the Geto Boys for the sheer brutality of all of it: lots of people dying, lots of bitches sucking dick, and no tolerance from G Rap for any of it. The most egregious offender is probably "Operation CB," in which G Rap chastises a kid for complaining of hunger when Rap's trying to fuck the kid's mom. (The CB stands for "cock block.") While it's hard to find humor in that narrative, the rest of the song is pretty witty. But Rap's discussions of sex are about as graphic as it can get, and his tales of drug running and making dudes eat pistols aren't spared any details, either. "Train Robbery" is a linear robbery tale that is crafted brilliantly, and simultaneously cringe-inducing.

G Rap weaves words on this record probably better than I've ever heard him pull it off on any other one. And Sir Jinx's beats are insanely great. Tracks like "Nuff Said" and "Crime Pays" are solid as stone, and when you break it down, there's really not a stinker on the whole album.

To top it all off, the guest spots are monumental: Big Daddy Kane kills it on "#1 With a Bullet," and when Ice Cube, Bushwick Bill, and Scarface show up on "Two to the Head," you know you're in for some murder raps. The beat is slow and steady, and the song is dark and dope.

"Ill Street Blues"
Posted by Wockenfuss at 2:05 AM

just found your blog. i just discovered how amazing this album is and ended up here. props you do some good work.