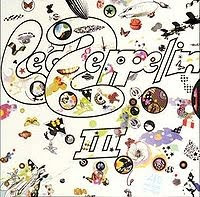 The softer side of Zep.

While I loved the first two Led Zeppelin records during my teenage years, this was the one that I really got into. Sensitive (by Zeppelin standards) cuts like "Friends," "Tangerine," and "That's the Way" got a lot of play in my Walkman. While the rockers like "Immigrant Song" and "Celebration Day" are also great songs, this is the record that will always be remembered as Led Zeppelin's departure into the acoustic realm. It was a cool move, and I'm sure a lot of folks didn't see it coming.

They still insist on dragging out a blues number, and this time it's "Since I've Been Loving You." Yes, it's got a tremendous guitar solo, but it just feels like they're unable to let go of their roots. And maybe there's nothing wrong with that, but like I said, it was these Zeppelin songs that always (though I probably wouldn't admit it at the time) bored me a bit.

"Gallows Pole" is still remains one of the better non-original Zeppelin songs, with Robert Plant finding his spot and not feeling the need to get too busy. I still dig that track. In fact, I still dig most of this record. Hearing Jimmy Page go nuts on the acoustic is a nice change of pace, and considering the full-on barrage of rock that would be coming on their next album, the world would have been wise to take it when they could get it.

This record also contains "Hats Off to (Roy) Harper," which is, while tucked away at the end, one of the weirder Led Zeppelin songs and should not be forgotten. Not that anyone's forgetting it, but you probably won't hear it on the radio sandwiched next to "Out On the Tiles" during a Double-Shot Tuesday. "Out On the Tiles": another good song from this one. Oh, and "Bron-Y-Aur Stomp" is also nice.

Yeah, this is definitely one of my favorite Led Zeppelin records. Maybe my favorite. We'll see what I say when we get to Physical Graffiti.

"Out On the Tiles"
Posted by Wockenfuss at 1:42 AM

I can say that "Immigrant Song" is my favorite Zepp tune, with "Dyer Maker" being my second. After that I kind of don't care honestly. Do you know what's funny? I don't really like classic rock, but I love reading about it. I one day spent about 2 hours reading through Eric Clapton's solo recording wikipedia chronology. And I hate Eric Clapton. Also, I find your depth of Zepp knowledge fascinating and impressive.