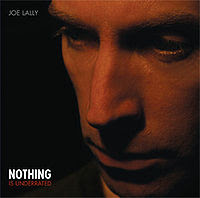 I didn't think it was possible for Joe Lally to mellow out any more than he had on his solo debut, but on this group of 13 songs he somehow manages to tone things down a little bit more.

The tracks sound a lot like There to Here, which isn't surprising considering the albums were released little more than a year apart and that he uses a lot of the same musicians. But what little pep emerged from his first record isn't really apparent on this one. And that's fine, because it makes way for more abstract jams like "Scavenger's Garden" and "Tonight at Ten." There's more guitar, and more in the way of noise, which is a welcome addition.

Lally's lyrics are also more indirect, and all of this makes this album a tough egg to crack. I dig that. I've had this for over a year, and I'm still getting into it. These songs are elementally a bit more diverse than his previous ones, but it's not a major jump. And that's cool: you can feel him growing while he finds his own voice.

I hope he keeps going with his solo work. I'm really curious to see where he's going to take this next.

"Skin and Bone"
Posted by Wockenfuss at 1:24 AM

As you mentioned, the lyrics on this one are a bit more abstract and I think that's why I dig this one a bit more. I especially like the first half and find myself listening to this one while showering or lounging around the house. Lally seemed to record all the songs he had stored up and then disappeared, which is too bad.