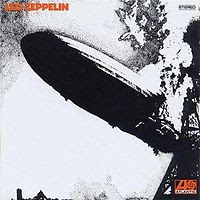 Who's ready to get the Led out?

I haven't purposefully listened to Led Zeppelin in years, but I spent many a solitary hour in my teens rocking out to Page, Plant, JPJ and Bonzo. I think most teenage dudes go through a Zep phase. Mine was intense, but it probably could have been a little more obsessive. (I reserved that behavior for The Doors.) Still, I managed to collect all their major albums on LP (not hard to do), and they still remain in my collection. And they will always remain in my collection. I doubt I'll ever get back into Led Zeppelin again, but it's nice to know the albums are there if I need them.

So, get ready for a week and a half of nothing but Led Zeppelin. I know most of these albums really well, but it's been a while since I've really put any time in. We'll see what I can remember.

We start here, with their eponymous debut. Or, as losers like to call it: Led Zeppelin 1. Don't call it that. Maybe you think you're distinguishing it from their untitled fourth record, but everyone calls that one Led Zeppelin IV. Let's just leave it like that.

This was never my favorite Zeppelin record. Maybe it's the two Willie Dixon covers ("You Shook Me" and "I Can't Quit You Baby"), maybe it's the drawn-out indulgence of "Dazed & Confused," which remains a terribly overrated song. However, most of the Zeppelin originals here (especially the shorter ones) are great. "Good Times Bad Times" is perhaps the most straightforward Zep tune ever, and it still packs a punch. "Communication Breakdown" is equally powerful, and even faster.

"Your Time is Gonna Come" and the terrific instrumental "Black Mountain Side" show the more mellow side of Jimmy Page's playing, and sound more like the Zeppelin that would show up on their third LP. Both really great songs. But, the lengthy blues of the aforementioned cover songs, along with the six-and-a-half minute reworking of the traditional "Babe, I'm Gonna Leave You" and the sprawling eight-minutes-plus of "How Many More Times" are too much for me. I get what they're doing, and I get why people like it, but I always thought Led Zeppelin was the perfect four-minute song band.

They'll prove to be just that on their next three records. That's when shit gets really good.

"Communication Breakdown"
Posted by Wockenfuss at 1:02 AM

I somehow never went through a teen classic rock phase, except for a really half-assed one when I liked Iron Butterfly and Janis Joplin for a few months in the 7th grade. Looking back I blame Nirvana as they hit me at the age when I probably should've been getting Zepped. I guess I got all Doors'd out but that was primarily by default as you listened to nothing but them for about 3 years. In my old age I kind of regret not being schooled in classic rock because I never relate to a lot of music articles that espouse the genius of Hendrix, Zepp and the like. Also, in my old age, I could never really what makes this music so important to people. I would also find it difficult to listen to the music as an album as I am already pretty sick of the well known songs. Anyways, I look forward to your reviews of the Zepp albums as I can now sound educated if ever suckered into a Zepp debate.